A Walk in My Shoes

Aucklander, Kate Chandulal is just 13 years old, but has already published a book.

It's called A Walk in my Shoes - and it's about her life, which is quite different from the lives of most kids her age, as she cannot attend school regularly and spends much of her time at Starship hospital. 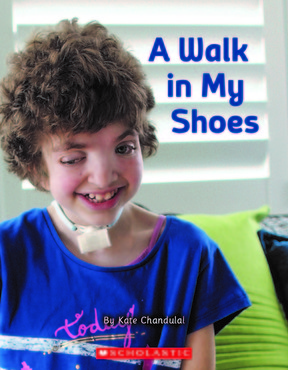 Kate told Jesse Mulligan she has severe scoliosis, which she says causes many people to stare at her in the street, and even make unkind comments, which she finds very hurtful.

“It can be very tough having it and it affects some of the things that I am doing.”

The book, which Kate has written for children, describes how people react when they see her tubes.

Kate also has crouzon syndrome, which she says makes her face and body look slightly different to other people.

Kate says younger children tend to be better at dealing with her tubes than older children.

“They don’t really bother about asking ‘oh what’s this?’ they just come up to me and see the real me.”

Her message is for people to treat her as they would any other person.

“I like to them to be caring, but also to treat me like any other person they meet, to treat me fairly.”

Laughing, talking and playing games are among some of Kate’s favourite activities to do with her friends.

“All the other things – you know.”

Kate’s writing has received glowing praise from readers, and she says a career in writing could be on the cards.

“I do write books all the time just about all different topics, I like writing about imaginative things too.”

She has written a book for children about dying, called It Is Time.

“It explains to children what it’s like and that it’s not scary and to not be sad, well not too sad, if someone they love has died because they’re really always with them in their hearts.

“Hopefully I will get lots of the books that I’ve written that I really like published.

“All my special messages will be spread to other people so that they will remember them and use them in their lives and pass it on.”

Kate’s teachers at Starship noticed from a young age noticed what an exceptional talent she is.

Her teacher Emma Hopner says hopefully A Walk In My Shoes will be published overseas, including in the Middle East and Europe.

“I think that’s one of the most lovely things about Kate’s writing is that it can help others and it will touch the lives of so many.”