A cure for smelly armpits? 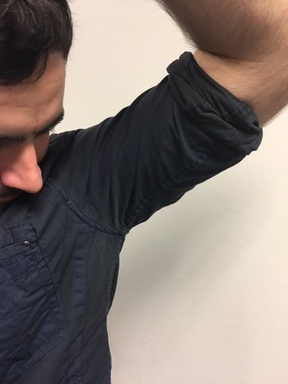 The bacteria on our skin is what causes body odour. But in some people the smell can be so putrid, that no deodorant can disguise it.

Chris Callewaert, a post doctoral scholar from the University of California, San Diego has discovered that replacing the underarm bacteria of a very smelly person, with the bacteria from a less smelly person can solve the problem, albeit temporarily.

He was investigating the underarm microbiome when he was told about identical twins who were visually indistinguishable, but one smelled a lot worse than the other. So he immediately selected them as his microbiome guinea pigs.

The non-smelly twin had to stop washing for four days, while the smellier one had to use antibacterial soap every day over that time. Dr Callewaert then collected the first twins dead skin from his underarm and swabbed it in the armpits of the second twin to see if that would reduce that twin's body odour. And he says it worked.

"I’ve heard stories about onsets after hospital visits or sleeping in another bed or having a child… in general your skin microbiome is stable over time, but when you have that shift in microbiome, it can sustain for a very long time.”

He talks to Jesse about why he is so passionate about the microbiome and how he wants to solve the body odour problem once and for all.