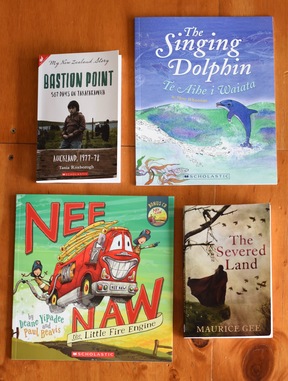 James Russell figured that if he was going to write one children's book, he may as well write three or four.  After 12 years in the newspaper business as editor and a journalist he's a now full time writer, the man behind The Dragon Brothers Trilogy and The Dragon Defenders, now with an app which makes the book characters come to life.

Bastion Point: 507 Days on Takaparawha
By Tania Roxborogh
From a series of vividly imagined accounts of real life events, seen through the eyes of fictitious child diarists.

The Severed Land - By Maurice Gee (Under the Mountain, The O Trilogy and The Salt Trilogy)

The Singing Dolphin: Te Aihe i Waiata -By Mere Whaanga