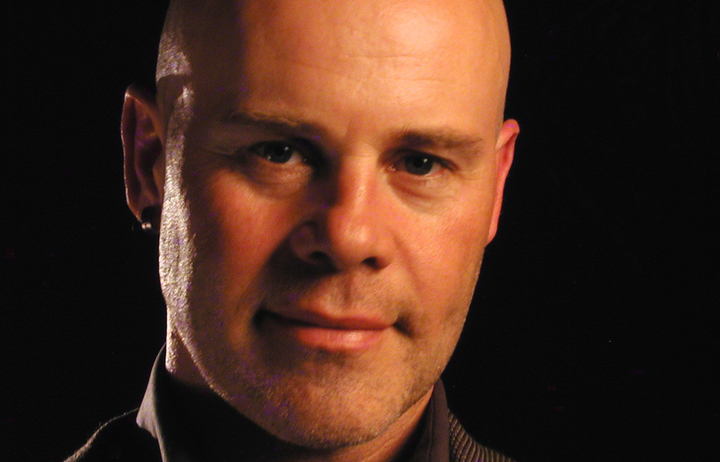 ­The 1982 hit ‘She Blinded Me with Science’ might never have come about if Thomas Dolby hadn't found “the guts” of a Powertran Transcendent 2000 synthesiser in a dumpster as a teenager.

Dolby shares his story in the autobiography, Speed of Sound: Breaking the Barriers Between Music and Technology.

On discovering the Powertran synthesiser:

The winter of 1978 was known as the ‘Winter of Discontent’ in England. There’d been a garbage strike and the rubbish was piling up on street corners. You could go through dumpsters and find the most amazing things.

I lived just south of the River Thames in London. I’d left school quite early and I was working in a fruit and vegetable shop in order to fund my night-time activities, going to see punk rock bands.

I happened to glance into a dumpster outside of EMS Synthesisers. EMS were known as the inventors of the synth that got used on tracks like ‘Dark Side of the Moon’ by Pink Floyd.

Synthesisers were a very rare thing in those days. You were very lucky to get your hands on one.

I found the guts of one in the dumpster outside their store and I took it home and managed to get it going with a soldering iron and an old speaker. I made some bleeps and blips and annoyed the heck out of my neighbours. That’s when I first caught the bug.

On his time at the posh Abingdon School:

We didn’t get much work done. We went and sat in coffee bars smoking and talking about the bands of the day – people like Genesis and Yes and so on.

When punk came along it was a real shock. In fact, I’d sat in English Lit class with a guy called Shane McGowan who later became the frontman of The Pogues.

Shane was immensely knowledgeable about literature and about music. He had an encyclopaedic brain and he was always the sort of arbiter of musical taste when we were at school.

I remember clearly the afternoon when he walked in and said ‘The Beatles, The Stones, it’s all rubbish.’ And we were like… (Gasps) ‘How could you possibly say that? These are our musical heroes! What should we be listening to?’

He said Iggy and the Stooges, Johnny Thunders, The MC5…’ and he named all of these American bands that we’d never heard of.

Our collective reaction to this was very similar to that of the New Musical Express when they first reviewed The Sex Pistols. Their attitude was ‘Who do they think they are? They spat at the audience, they walked off-stage swearing after 25 minutes…’

So it was really a sign that corporate rock had taken hold in the mid ‘70s and was due for an upset.

On seeing Split Enz at a UK festival in the ‘70s:

They were pretty crazy. They were really a sign of things to come.

On playing keyboard for Foreigner:

I’d never heard of them. It came about through a mistake. I’d fled London ‘cause I had people hounding me for debts. I went to Paris and I was sitting on my backside in the metro every day playing Bob Dylan songs for tourists with a guitar.

I got a message from a mate in London saying ‘Mick Jones is trying to get hold of you to do a keyboard session in New York’. And I thought ‘This is fantastic. The Clash have finally given me the call.’

It turned out to be not that Mick Jones at all, it was the British Mick Jones that had gone to America to form Foreigner.

When I listened to their music I was slightly dismayed, but they told me they had new songs that were a lot more introspective and gentle and needed a soft touch on the keyboards.

So I flew to New York and made an album with them called Foreigner 4. They would leave me alone at night in the studio with all the keyboards I could lay my hands on and they’d come back in the morning and see what I’d done.

They came in one morning and heard what their bass player described as ‘massage music’ which was the intro for the song ‘Waiting For a Girl Like You’. That song ended up being a bit of a radio classic.

It was great for me aged 19, or whatever I was, because I did take home a decent pay check and it enabled me to make my own first album The Golden Age of Wireless without having a record company lined up. 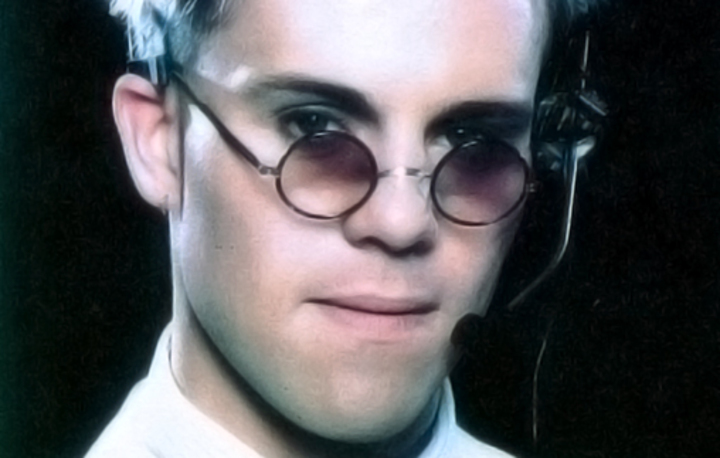 On The Golden Age of Wireless:

My first album came out around the world, and it was very well-acclaimed and reviewed and it sold about three copies.

Round about the same time MTV was starting to become influential because it had reached the main markets in the USA and it was having an effect on the charts and radio playlists.

So I looked at the music video genre, which was not all that thrilling at the beginning, not all that imaginative, and it struck me that a music video was a bit like a silent movie with a soundtrack.

My silent movie heroes were people like Buster Keaton and Harold Lloyd and Charlie Chaplin – the underdog heroes of the era – and they were very different from the contemporary ‘80s pin-up frontmen like Simon Le Bon and Sting.

I wasn’t gonna be able to compete with them in the poster boy stakes so I decided to go the underdog route. I drew a little bit on my ancestral heritage with the Cambridge academics and came up with the character that you can see portrayed in ‘She Blinded Me with Science’.

On ‘She Blinded Me With Science’:

If you’re gonna be saddled with a single song that people always expect you to play, then it’s not a bad one to have.

On his visit to Michael Jackson’s mansion in California:

We had a very touching conversation about music production, equipment, about the critics and how to be thick-skinned enough not to be brought down by the critics and so on.

And midway through the evening I suddenly became aware of these little faces peering through the bannisters at me. Down the stairs came a troupe of about ten kids in their dressing gowns and pyjamas with radio-controlled toys.

And Michael sat in a big medieval throne in the middle of the room while the kids played with these radio-controlled cars around him.

He and I were having this conversation and all of a sudden he’d break off and say ‘Jimmy, don’t do that. Jimmy, you need new batteries in that. Remember we said we’d share our toys’.

So he was just sort of king of the castle with all these kids and it was a delightful and totally innocent thing. I’ve told this story many times, but over the years as suspicion unfortunately got cast on Michael’s motivation, that evening that I spent at his house became more and more surreal. 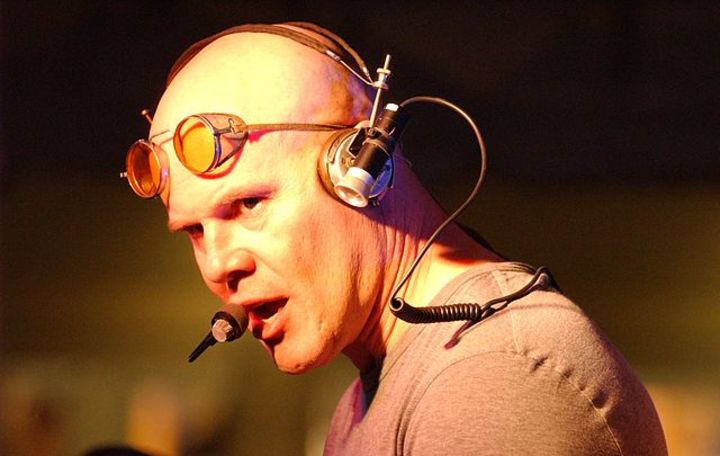 On why he left the music industry for Silicon Valley in the 1990s:

At the end of the ‘80s the cracks were beginning to show and by about ’91 and ’92 you could download digital files. It hadn’t become a phenomenon yet.

But listeners were using the same computers that I was using to make music and now we were all connected by the internet. So the writing, I think, was on the wall for the music industry.

They’d really prospered in the time of manufacturing and distribution – stamping out pieces of plastic in plants and having fleets or trucks and retail relationships – that was the only way to get music out there.

As soon as the internet came along and digital music, it was really the beginning of the end. So it instantly became less enthralling to me to be there.

Plus the fact that I’d outstayed my welcome. I wasn’t cooperating with them, I wasn’t doing the formulaic thing, I continued to experiment with music at the cost of commercial success.

Then I went to Silicon Valley and Silicon Valley was the opposite. It was just starting to really blossom with the early internet, the world wide web. And that was where I wanted to be. That was so much more exciting, more thrilling, more adventurous to me.

On the Nokia ringtone:

To cut a long story short, my company Beatnik in Silicon Valley created a software synthesiser technology which Nokia licensed in order to do ringtones in their phones.

Nokia licensed Beatnik’s technology and shipped it into every phone they made after about 1999. In the course of that deal they hired myself and a group of composers at Beatnik to programme the tones in their phones.

The issue was you can’t just ship a pop song in a phone. So the only one they were able to ship with was one by a guy that had been dead for 150 years. The title of what we think of as the Nokia ring tone is actually ‘Grande Valse’ and it was composed by a guy called Tarrega in the 1800s.

It’s interesting that having come so far I should be reduced to doing four-note ring tones on mobile phones, but at the same time it makes for a good trivial pursuit card.

I think than I am irresistibly drawn to early-stage ideas, ideas that have not been explored yet, where it’s calling out for somebody to go and define what this thing is there for.

That’s when I get most excited – when I can be a pioneer in new fields and I can express myself in a stimulating area. I had this irresistible need to work in limited areas, but they were limited because they were brand new and unexplored.

For young people today it’s very much a case of… well, there’s no such a thing as a problem because the solution is a few key-presses away.

‘I’ll download the user manual, I’ll Google it, I’ll find a YouTube video of somebody who has figured out how to do it, I’ll post a message on a forum, I’ll ask my friends’ and then I have a solution.

Although that means it’s very quick to get from A to B, you never have that unique experience when you hit a road block and you have to veer off on a diversion and find a different way around things. And often that’s when we’re at the most creative.

My students are super-smart and much more educated, in a way, than I am. But if there’s anything I want to rub off on them it’s the idea that if you create some guidelines for yourself when you’re being creative… you can get very expressive with limited tools. Less is more.

I’ve had to put my students outside their comfort zone. I’ll lock them away in an edit suite, turn off the internet and say ‘An hour from now I’m going to see you in the main room and what you’re doing we’re going to put up on the screen and show the class’.

They have no choice but to do that, or else they’re going to make fools of themselves.