Kahurangi – half human, half bird

Kahurangi is a special kōkako who lives at Pukaha Mount Bruce Wildlife Centre in the Wairarapa.

The kōkako was named Bird of the Year today 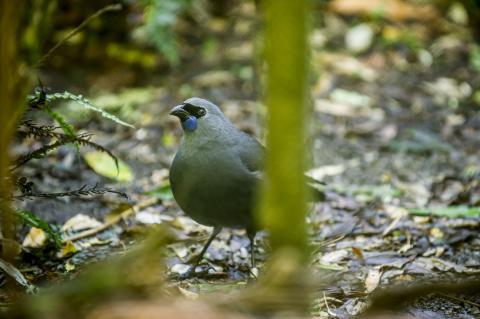 Conservation manager at Pukaha Mount Bruce, Todd Jenkinson, explained to Jesse Mulligan what is so special about Kahurangi.

“I walk past each morning and she gives me a wolf whistle, which is not normal for a kōkako.”

Unfortunately Kahurangi isn’t entirely convinced she’s a bird, and because she was hand-reared, her call is a hybrid of wolf whistles and a version of a kōkako call.

“Young chicks learn their dialects off their parents and unfortunately she was hand raised and never got to learn her natural dialect.”

She also has a fondness for human contact, but she likes boys better than girls.

“If you have a beard you’re liked even more, we have a couple of volunteers that have beards and she’s particularly fond of those guys.”

As for her own kind, Kahurangi is less interested.

“She has been introduced to other male kōkako before and she’s not interested, and is only interested in humans which is fine it makes her a great advocacy bird.”

But at this time of year she goes through a sad ritual.

“She starts to build her own nest, lays her eggs which are infertile and sits on them for a few weeks before she realises nothing’s going to happen.”

Pukaha Mount Bruce Has 942 hectares of native bush which it is currently restoring and a number of breed for release programmes.