More than half a century ago, three brothers, a cousin and their friend formed a band that will forever be linked to California, sun and surf. The songs by the Beach Boys became anthems for good times but behind the scenes it was anything but fun, fun, fun.

Mike Love talks about his cousin Brian Wilson's mental illness, the lawsuit he filed against him, and the band's brush with serial killer Charles Manson in his new book, Good Vibrations: My Life as a Beach Boy. 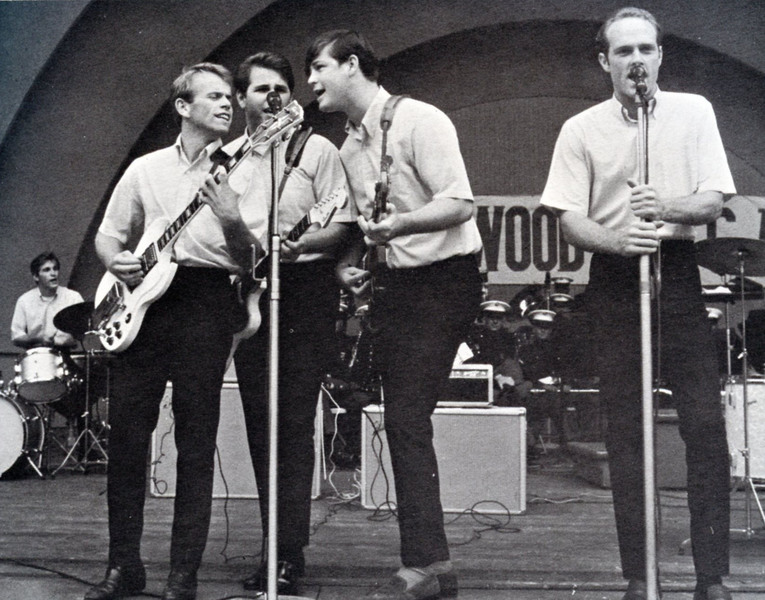 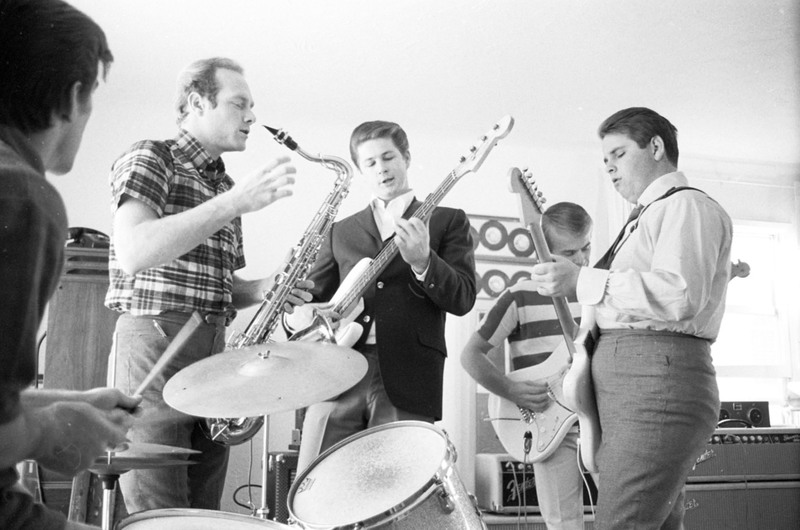 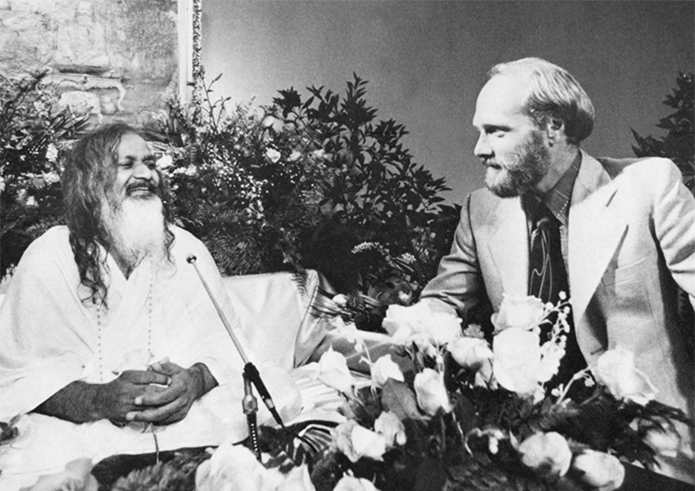 Mike with a yogi. Image from mikelove.com 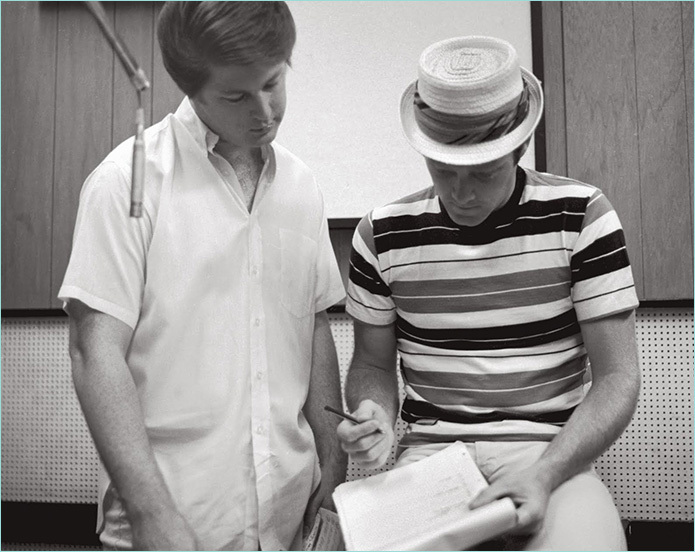 Mike and Brian. Image from mikelove.com 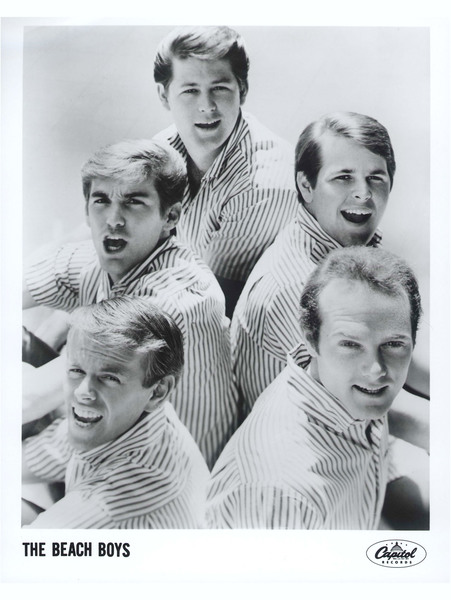 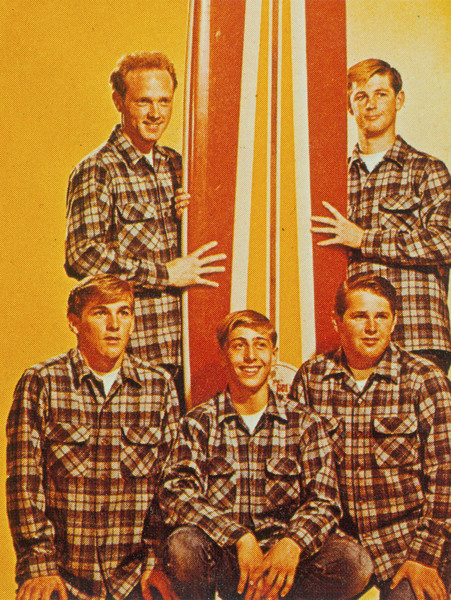 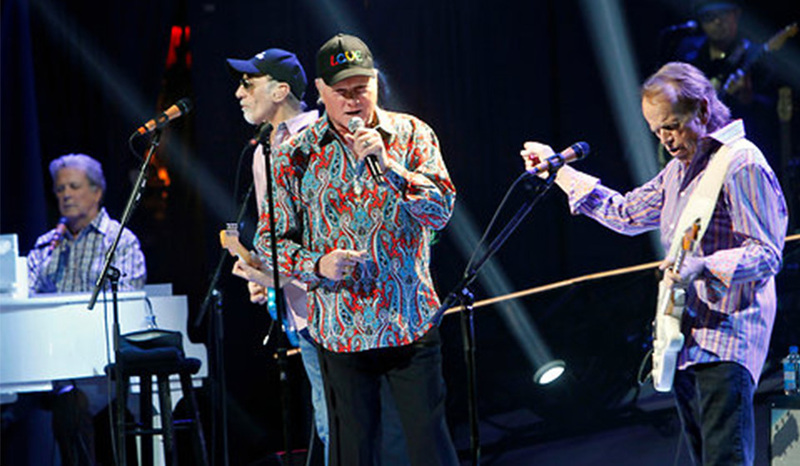 The Beach Boys on Stage. Image from mikelove.com 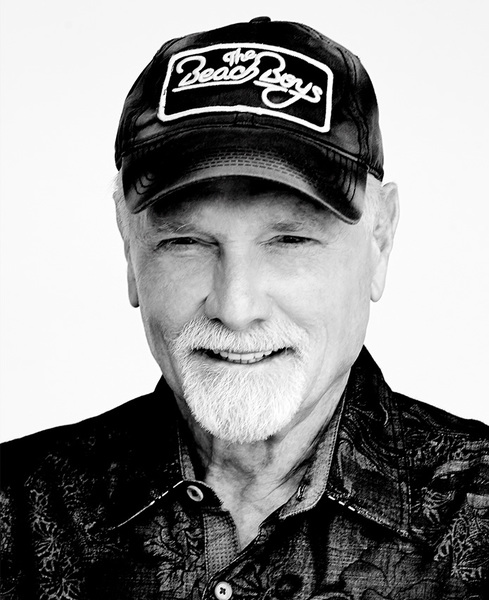 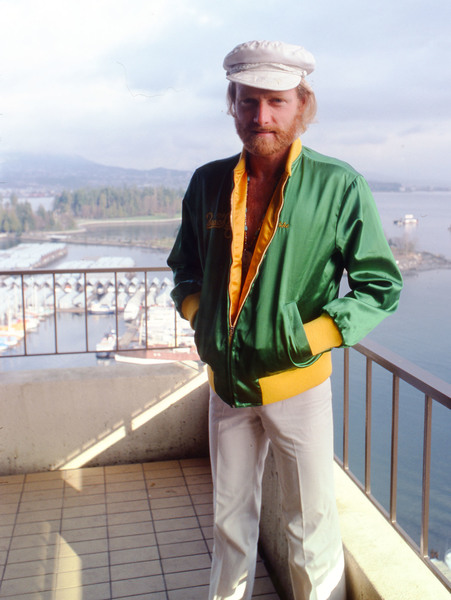 Good Vibrations is the title - is that your favourite Beach Boys' song?

One of my favourites yes, my cousin Brian [Wilson] and I, Brian really I think out did himself on that track’s instrumentation and it was recorded in several different studios, and he called upon me to come up with the lyrics.

I came up with the chorus line ‘I’m thinking of good vibrations, she’s giving me the excitations’ as a result of the bass line of the chorus, and then I wrote all the words to the verses as well, that my cousin Carl sang so beautifully.

Probably ‘Kokomo’ because that was a song that exceeded ‘Good Vibrations’ as far as popularity and several million copies sold of that; in Australia it was Number 1 for eight weeks in row.

And it’s one of the biggest sing-a-long songs in our show – everybody sings along to that.

Was the Beach Boy sound and lyrics about the beach and fun in the sun, the right music at the right time?  Did you reflect the culture or create it?

We we’re reflecting the environment that we grew up in in California and the biggest deal was to go to the beach you know? When I was in high school we would listen to the surf reports and if the surf was up we would head to the beach we would miss an afternoon class or two.

We were just simply reflecting what was going on in our lives. We loved the cars, the wonderful, very powerful, cars from the fifties and the sixties which we as young guys were all enamoured of, so that was our second motif.

The first one was surfing; ‘Surfin’ Safari’, ‘Surfin’ USA’, but the other thing was and “shutdown” and “I get around” and “fun, fun, fun”, all about cars and cruising and those were the two themes of our earliest music – along with the girls – ‘California Girls’, ‘Surfer Girl’, ‘Barbara Ann’ and so on.

Really just reflecting a culture of southern California and our lifestyle growing up.

How did you go from cousins singing at family get-togethers to becoming the Beach Boys?

There was a record producer that asked us if we would do a folk song, we said we like folk music, we like the Kingston Trio, we like Peter, Paul and Mary but we’re not really into folk music as we are into R’n’B and rock‘n’roll, so let us come back to you with something.

So we came back to them a few days later, my cousin Brian and I banged out a song called ‘Surfin’’ that was the first song we recorded and the first song that ever got played on the radio and it became a pretty good size hit in southern California.

Unfortunately, it was on a small label and it didn’t have a lot of distribution so we had to wait until we signed with Capital records in 1962 before ‘Surfin’ Safari’ came out and in the following year ‘Surfin’ USA’ to get the international recognition which we very quickly did.

When the beach boys started in 1961 you were already a husband and father. Did that add pressure for you to make sure the band worked?

It added pressure to my family life there’s no doubt about it. I ended up getting divorced from my first wife Franny who’s a wonderful lady, we had two beautiful daughters and we’ve never had a cross word for each other, but we were so young when we first got married.

And then the stresses and so on of travelling and being popular for the first time in your life - it was a bit much to contend with and so it did not bode well for my first marriage.

Was there chemistry between you and Brian Wilson? Did writing songs come easily?

Absolutely, you see Brian was so gifted musically in terms of chord progressions and chord structures and harmonies and melodies. Very early he adapted like a duck to water when it came to working with musicians in the studio.

And because I wrote right with him, and would be singing out what I was coming up with, it was in my key so many, many of the early hits of the '60s were my singing lead, Brian the high part and constructing the harmonies through the rest of the guys.

You talk in the book about some signs in 1966 that all was not right with Brian Wilson. What concerned you then?

He began using some drugs that made him act kinda strange, and at one time he was very dynamic in the studio and then he became almost like a recluse, for quite a while.

In 1967, 1968 and 1969 [he was] like that, I mean we even installed a studio, Brother records our personal company, at Brian’s home and we did an album called Wild Honey in that studio a song called ‘Darlin’’ on Wild Honey I wrote the words to that, worked with Brian on that.

So he was still available to us musically, but he didn’t have the passion for producing that he once had particularly during the time he was doing the Pet Sounds album which was released 50 years ago this year.

On experimentation in the studio.

The blend was always our obsession, our harmonies and the blend.

That blend is what has distinguished the Beach Boys from so many other groups over the years, you can hear the sound of all of us together

Brian on the high part, me on the low and or the lead, and with all those four part harmonies. That’s been our distinctive sound. 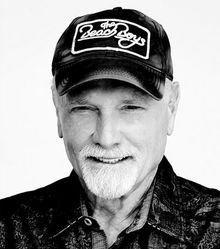 You tell a story in the book about crossing paths with The Beatles. Was there rivalry between the groups?

There was competition and rivalry, but positive.

We were fascinated by The Beatles’ music and we loved it and I think they with us, in fact Paul McCartney has said wonderful things about our song ‘God Only Knows’.

He said really great things about the Pet Sounds album when he first heard that.

Bruce Johnstone, one of the guys in our group, took the acetate of the Pet Sounds album to England with him and played it for Lennon and McCartney.

They heard it and said ‘wow this is really a fantastic album, what are we gonna do?’ Paul McCartney literally said that and he came up with of course Sgt Peppers.

in the Rolling Stone’s 500 albums of all time Pet Sounds is number 2 and Sgt Peppers no 1 – but that’s pretty good company I’d say.

George was so spiritual and a great musician, and a great person and I have a lot in common with him. We both loved our meditation and got a lot out of being there - I still meditate every day.

What part did you play in The Beatles hit ‘Back in the USSR’?

I was at the breakfast table one morning [at Maharishi’s] and Paul came down with this acoustic guitar and played the first verse of ‘Back in the USSR’ for me and he didn’t have the bridge yet, and I said you want to talk about all the girls around Russia.

Like we did in ‘Girls Around the World’ and ‘California Girls’ and he actually did - turns out Sir Paul’s able to craft a tune pretty handily,

He had some advice for you?

We were on the roof of the place we were staying, taking a break, and he advised me to take more care with our album covers and here’s the mastermind of Sgt Peppers brilliant album cover and the Pet Sounds album cover was photographed at the San Diego petting zoo with a bunch of goats and things.

On meeting the Manson family

That was a pretty horrible situation, Dennis [Wilson] had met a couple of girls hitch hiking and brought them back to his house and next thing you knew, we got back from a tour and Charles Manson and these girls were living in Dennis’ house.

They were helping themselves to everything; transportation, food everything and we were actually invited to dinner one time Bruce [Johnstone] and I went over to dinner at Dennis’ invitation and Charlie was there and some guy named Tex, and a whole bunch of girls.

We were the only ones with clothing on; it was just plain weird at the time but it became frightening when the murders started happening.

I got a call at my place in Manhattan Beach, California saying “prepare to die pig” - they were on a rampage.

Unfortunately, my wife at the time had had an affair with Dennis Wilson and they’d gotten one of the Manson girls to babysit our very young children – well that freaked me out.

Once the murders became known, and once we knew who was responsible, I moved to get custody of my children, which I did, because I was just very, very worried about them and the environment they’d been subjected to.

On the lawsuit against Brian Wilson for song writing credits.

My uncle Murray was very angry with Brian, and me for firing him as our manager. When we started I didn’t know what publishing was and he eliminated my name in terms of authorship on songs like ‘California Girls’ ‘I Get Around’ and ‘Surfin’ USA’ and others there’s a list of 35 songs that I had to go to court to establish my authorship.

The attorney didn’t think Brian would have to pay me because of the lapse of time, but that was not in fact true so but it was unfortunate but I had to go to court to establish my authorship which I did and the jury awarded me everything we asked for.

How is Brian now?

If it’s just Brian and I we have a good relationship; but his life had taken one path and I’ve taken another and there’s always someone directing what he can and can’t do.

We tried to get some new music done on our 50th anniversary tour and project. I was told that Brian doesn’t write the way he used to, He and I had had conversations about doing some music together but it was disallowed - and it wasn’t by me.

On still touring at the age of 75.

It’s a pleasure to come out on stage and do what you did as a family hobby and turned out to be a long-lasting profession that still makes people happy.

This is an edited, condensed version of Mike Love's conversation with Jesse Mulligan.