The history of teenagers in New Zealand

Teenagers are one of the most talked about, worried about and analysed groups in modern NZ society.

But was it always this way? What role have teenagers played in our nation's history? 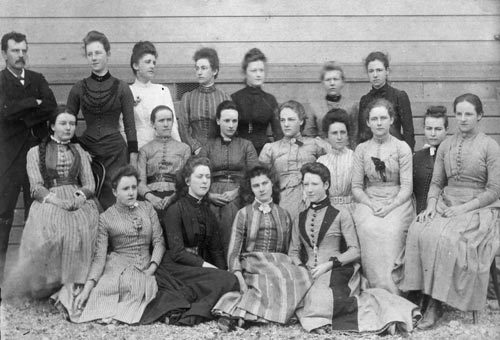 A group of form six students from Wellington Girls' College pose for a photo with language teacher Charles Naverne in 1891. Photo: Te Ara

Historian Grant Morris of Victoria University has studied the subject.

The word 'teenager' is a 20th century invention, he says, and originated overseas. In New Zealand the word started to be used around the middle of last century.

In the 19th century you were either a child or an adult. Children were dependent on their parents, although they often worked, and adults were expected to work and raise families.

Boys would often help out with farm work and girls with domestic work; others worked in industry. Working age was from age 12; some of this work was paid, some of it not.

In Maori society there was an expectation that once someone reached puberty, they would effectively become an adult and work.

Teenagers didn't exist in colonial times and this situation did not change markedly until secondary schooling became more common during the early 20th century and a school leaving age was introduced and gradually raised.

Teenage males served in World War I and World War II despite the recruitment focus being on men aged over 20.

But the teenager we know today emerged after World War II

As New Zealand became more prosperous, and the influence of the United States grew, language, dress and cultural tastes developed that were particular to this group. And they came to be seen as a distinct group.

Bodgies, widgies, boy racers, skaties and homies are all examples of teenage sub-groups since the 1950s. And from the start teenagers have shown rebellious tendencies which has caused older generations to fret.

The Mazengarb Report on juvenile delinquency in Lower Hutt, published in 1954, caused a moral panic at the time as it revealed teenagers were drinking and having sex.

“Throughout our history teenagers are first ignored as a distinct group, and then they tend to be recognised only as a group – rather than as individuals,” Mr Morris says.