A New Zealand study has found support for a clear link between concussion and cognitive difficulties in rugby players later in life. 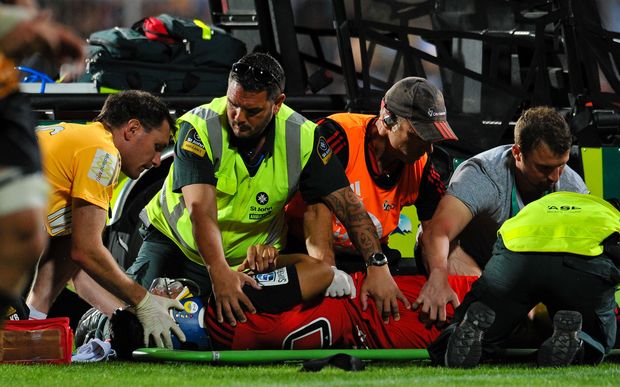 The Crusaders' Reed Prinsep is treated after suffering a concussion (file) Photo: PHOTOSPORT

The study, published in online journal Sports Medicine, was carried out by AUT in partnership with New Zealand Rugby, and funded by World Rugby.

"Now this research showed that there is a clear link, and so now that really points us in the direction that we do need to be doing far more work in this area, and we need to understand the links much more clearly - but obviously we do need to be aware that this is a different period of rugby, and there have been a lot of changes since then."

She said the study did not look specifically at dementia, and instead looked at effects on different areas of cognitive functioning.

It looked at 366 elite and community rugby players, and used cricket and hockey players as a non-contact sport control group, and found those in the two rugby groups suffered more concussions than the non-contact group.

"So the elite and the community rugby players performed worse in terms of what we call cognitive flexibility, which is where people have to switch quickly between tasks and also executive functioning, which is about making decisions and planning and organising activities."

She said the elite group also had more difficulty in complex attention tasks and processing information than the non-contact groups, but there was not much difference between the elite and community rugby players.

This made progress on a previous study that delivered no conclusive findings, with the difference being the severity of the concussion studied and the length of time between injury and cognitive effect. she said.

"So these are previously what we would have considered to be relatively minor injuries, and we've been looking at the effects much longer and further down the line, so the fact that we saw any effect at all I think is certainly notable," Prof Theadom said.

"Before we conducted this study we didn't actually know if there were any long-term effects or not."

Meanwhile, in a bid to further study concussions in community sport, Otago's provincial rugby players will from this week wear an electronic microchip behind their ears during all home matches to measure the forces at play with head knocks.

The device, no bigger than a $2 coin, was the culmination of a two-year partnership between the University of Otago, which would conduct ground-breaking research into rugby-related concussions, and Auckland company CSx.

With the support of New Zealand Rugby, all 23 Otago players will wear the device for the first time in Thursday's home match against Wellington.