Mastering Te Reo, one Monday at a time

Manuel Springford of Te Rarawa and Ngāi Tahu descent didn’t grow up speaking Māori but his grandfather did. 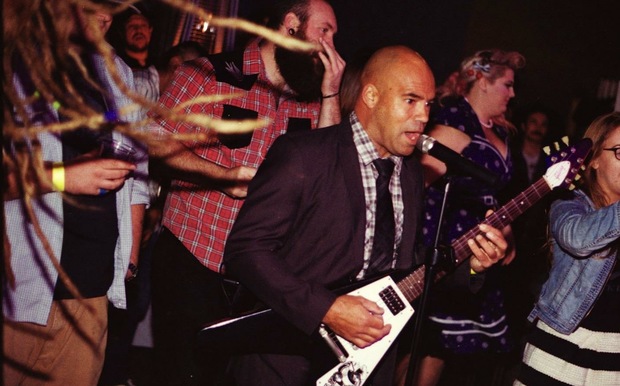 Manuel Springford performing with his band WavePig, who perform some songs in Te Reo Photo: supplied

So he learnt the language for a couple of years so he could communicate with him.

After his grandfather died Manuel realised his Te Reo was getting pretty rusty so he decided to speak the language exclusively - one day a week.

He says it has improved his skills, and would love to see businesses like cafes or petrol stations where he could interact with them in Māori.

Read an abridged version of their conversation

Well, I didn’t actually grow up speaking Māori, so I went to study it for a couple of years so I could converse with my grandfather. But once he passed away I found I wasn’t using it at all really, only when I would go surfing up in Ahipara I would have a conversation with his brother. And the only other place I would use it [is when] I play in a punk band and we play a couple of songs in Te Reo so I was sort of losing [the language]. So I thought this would be a great way to practice and get other people on board.

So what does this look like? It’s every Monday. Are you using it at home?

What do people make of you?

A lot of confusion. I’ve been using a lot of hand signals and things like that. It was a bit overwhelming when I first did it and I was quite quiet about the whole thing and quite shy about it. Not it’s grown I’m pretty confident and most people can get what I’m trying to get across.

Do you go into shops speaking Te Reo?

Yeah, I do. So I go into the bakery so I might say “kopaki kiko maku” which means “meat pie for me”. And to be honest they don’t really understand so I point to it. I haven’t really worked out how to say mochachino in Māori yet, but I’m getting there.

What about your family? What do they make of it?

They’re super supportive. They were really frustrated at the start because they couldn’t really understand me, but they’ve really taken it on board. My wife even went and did a Te Reo course for a year so it would help her to understand me. The kids have really taken it on board. It’s really easy these days because of technology you can get a translator app on your phone which is really good. So the kids just tease each other in Te Reo now, which is great.

Have you got to the point that you have started thinking in Māori on your Te Reo days?

I think a lot more in Māori now and I think that’s been one of the hardest things for me is that when I’m trying to talk in Māori I always try and translate it to, or from English in my head.