Why is Lego getting so violent? 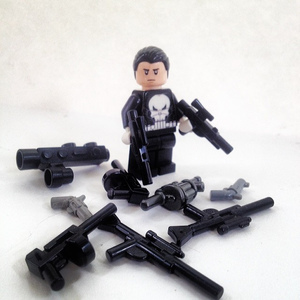 New research shows that Lego has become much more violent over the years since being patented in 1958.

Associate Professor Christoph Bartneck from the University of Canterbury's Human Interface Technology Lab says Lego made a very good study as it's been around for a long time.

He says weapons were not initially in Lego which was focused on construction and farming but has recently become more focussed on conflict and aggression.

Lego might say that they’re not driving this added violence, in fact they’re just responding to what children want in their toys and the “good guys vs. bad guys” has been popular since cowboys and Indians or the old war games we used to play. What do you say to that?

I totally agree that conflict is an important aspect of play and one should not shy away from this. It is important that kids play conflict, there’s nothing wrong with it. The Lego company, they make a couple of things really right these days. They’ve grown to be the biggest toy company on the planet. Obviously their toys sell very well, so they are doing things right. They even have a policy specifically to violence and how to play with conflict. What they’re trying to claim is that they embed violence in sometimes humorous ways where it’s not so serious. But our study has shown quite clearly that the atmosphere in which violence occurs are not really humorous, they are actually more threatening and exciting, so I think the tone that they are aiming for they don’t quite hit in the catalogue pages.

Another thing as well of course is that Lego has heavily subscribed to licensing, so they’ve started to do Star Wars Lego. There used to be a time when Lego was just Lego and they created their own models and there was just nothing, no other fantasy world other than the Lego fantasy world. Now we’ve got Lord of the Rings, we’ve got Star Wars, we’ve got all sorts of things and these kinds of environments are a little bit more violent.

On the other hand of course you can see that Lego has not yet made an army. So a current army or a WWII army, they never existed. They always try to put the violence in some form of fantastic world. So it always stays away from reality. But still, if you look through the catalogue pages and you constantly see somebody shooting someone with laser blasters, so this is something that you just have to acknowledge, that this is part of Lego land.

In fact it’s a stated policy of Lego’s that they aim to discourage pretend violence as a primary play incentive, is that right?

Yeah. What they claim and what the kids do is another thing. Also I think you have to distinguish between the marketing and what the products really are. If you go to the Lego shelf these days, you will see a lot of conflict. I think this is just something we need to be aware of. As parents we have great influence of course because, let’s say that the catalogue pages show that you’re supposed to fly the plane around and shoot at things, doesn’t mean that your kid has to do that. You can play differently with it. It very much depends on how you play with it. You can even toss the instructions away and do your own thing, which would be even better. Freeing yourself from the constraints of what the Lego company is pre-building for you. Make your own spaceships, it’s much better.

There’s also a concern about the increased gendering of Lego, although presumably this was outside your scope of your study.

Yes indeed. We did not look at gender at all, but of course it has been a debate forever. The Lego company has tried numerous times to appeal to girls, with mixed results. The latest attempt has been actually quite successful, so I think this time around they got it quite right. There was recently a process that the Lego company is now doing, where Lego fans can actually propose their own set of what Lego should be building. One of those sets was the female researchers, which was proposed and Lego actually picked up, and now you can actually buy a Lego set of female scientists. That is a good example of how the Lego company took some ideas from the community and turned them into reality.