"Bread is a major source of salt in the New Zealand diet. Salt, we know, increases blood pressure, which increases the risk of heart attacks and strokes. So it’s a sort of logical place to start when you’re thinking of how to design a healthier diet for New Zealanders" - Professor Nick Wilson. 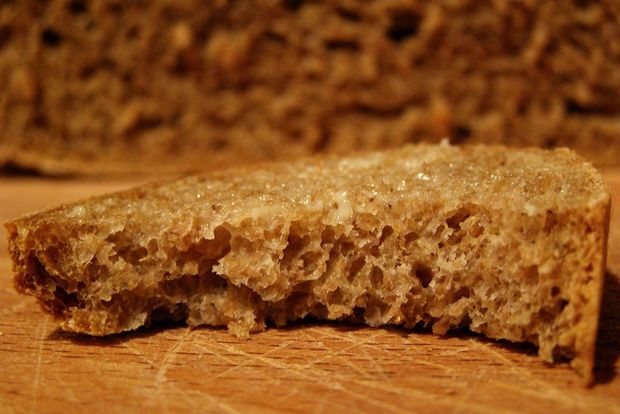 A team at the University of Otago in Wellington is working on the design of an affordable low-sodium bread.

In response to this interview, Robert of Devonport sent in this bread recipe:

Flour of the variety to one's liking, approx 650g per loaf, seeds and spices (carraway is a good one), some half litre of lukewarm water and a pinch of salt. There is no need to be precise about these quantities, all you aim for is a reasonably sticky coherent texture, not too liquid. All is kneaded together by hand in a big bowl, that is the hard part and takes about 5 minutes.

The sourdough starter is a bacteria culture which lives in a small jar in the fridge, with the lid sitting loosely on top to allow breathing. Half gets diluted with hand-warm water and added to the dough.

The remainder of the starter culture stays in the jar and gets a bit of water and plain flour to make up for the volume loss. It can be divided and shared with other bakers, which is your insurance policy in case your own culture was to dry out or get contaminated by mould, which can happen if you are not meticulous with keeping your hands and used kitchen implements away from it.

The loaf moulds are filled to about 2/3 height and shoved into the oven on a middle position rack. The oven should be at a good room temperature or slightly above. In some ovens the trick is to leave the internal light on (without the fan! ) to achieve and maintain those warm and moist conditions the bacteria need to do their job.

That takes typically 12 hours, but it can be even longer if it's too cold. A "Do Not Disturb" sign at the oven door avoids the risen dough collapsing in the case of it getting exposed to vibration or cold draughts. It is very sensitive that way, and the moulds should not be touched until baking is complete.

Once the dough has risen to the top of the loaf moulds, the oven can be set to 200 C. Baking takes about 1 hour, depending on moisture content.

We use silicone moulds as the loaves come out easily immediately after the baking, without having to grease them too much, if at all.