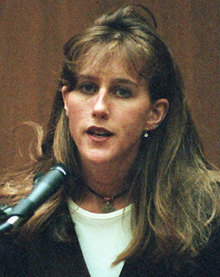 Kim Goldman testifies in 1995 about how she found her brother's waiters' uniform flung over a door in his bedroom. Photo: AFP

Kim Goldman found herself in a situation she never could have imagined when her brother Ron Goldman was murdered and American football star OJ Simpson went on trial.

She was just 23 years old in June 1994 and in the middle of a media frenzy. She's now a victims' advocate who helps other families who suddenly find themselves grieving for a terrible loss in the media spotlight.

She's spoken to families who have suffered loss in high profile cases like Debra Tate whose sister Sharon was one of the Charles Manson murder victims.

Kim Goldman talks about her book, Media Circus: A Look at Private Tragedy in the Public Eye.