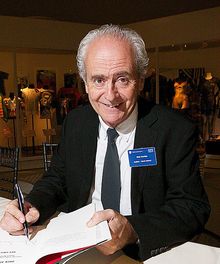 Dirty tricks - power, politics and vasts amounts of money. Britain's phone-hacking scandal has made for a compelling story.

In fact, George Clooney has just announced he's making a movie about it.

Simon Mercep talks to the Guardian journalist who started it all, Nick Davies.

He spent eight years uncovering the full extent of not only hacking at the News of the World, but how other British institutions were caught up in the practice.