When The Music's Over - The Doors.  Chosen by Sam Hill

Dawn Morgan and her husband Gary 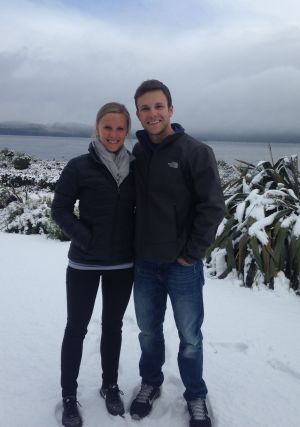 The weather caused road closures last night, with State Highway 94 between Te Anau and Milford only being re-opened this morning. Pam Turnbull is the owner of Loch Vista Bed and Breakfast located on the highway overlooking Lake Te Anau.

Packaged foods may be even less healthy than you thought. A new study has found that fewer than half of all packaged foods were healthy enough to actually carry a health claim. The researchers scored more than 23,000 packaged foods and non-alcoholic drinks sold in New Zealand and Australia in 2012. The leader of the study is Professor Cliona Ni Mhurchu from the National Institute for Health Innovation at the University of Auckland.

A five-part reading of Michael Morrissey’s frank description of two serious bipolar episodes is told in a riveting and lively manner.

An improv theatre that produces talents like Tina Fey, Bill Murray, James Belushi, Steve Carell and Amy Poehler must be doing something right.  For 50 years, The Second City in Chicago has turned out incredible comedic talent.  What most people don't know is that the top executives at the company have also been helping businesses do better by using principles of improvisation.  Jesse talks to CEO Tom Yorton about their corporate training and their new book, "Yes, And: How Improvisation Reverses 'No, But' Thinking and Improves Creativity and Collaboration."

104 Mandarin Language Assistants are about to head to primary and secondary schools across the country.  Hailing from different parts of China, these tutors will be billeted with homestays to experience grass roots life here in exchange for teaching Chinese language and culture.  Lynda Chanwai-Earle heads out to meet them during their first welcome to a marae

TITLE:    When The Music's Over

ARTIST: Bill Haley And His Comets

TITLE:    Rock Around The Clock

ALBUM:  Rock Around The Clock