1:10 Best song ever written - Helen McNeil of Auckland nominated 'If I Only Had Time' by John Rowles.

1:25 Eight Months to Mars - Former All Whites coach, Kevin Fallon is our next passenger to Mars - not surprisingly he has strong views about what NZ Football should do as we await the return game with the Mexicans. 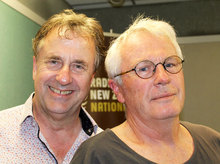 2:10 The Beginning of Split Enz

Mike Chunn (Enz original) and television producer, Chris Bourn - 40 years ago today - a band called Split Ends made its on screen debut on the NZBC's New Faces talent quest. It's believed to have been their first television appearance. Split Ends (the 'z' was to come) competed in the November 18 heat in 1973 with the song '129', and a week later, played 'Sweet Talking Spoon Song' in the Grand Final. (won by Bulldogs Allstar Goodtime Band). Chris Bourn was the New Faces producer for this famous episode, recorded in Wellington.

2:45 Feature album - The Minutes by English singer-songwriter Alison Moyet, released this year, and her highest charting album since 1987.

3:10 Feature Author - Author and journalist Wil Hylton talks about the quest to find a B-24 Bomber that went down over  the Pacific near the Island of Palau during the Second World War.  The families of the 11 crew wanted answers and one amateur explorer made it his mission to solve the mystery. The link:http://www.wilshylton.com/#!trailer/c2aj

3:30 Robotics - Veronika Meduna - Innovation is seen as a driver of economic wealth, but for a small country like New Zealand, turning a good idea into money can be difficult. The University of Auckland is tackling this challenge by joining forces with a German research institute that specialises in commecialisation.
Veronika Meduna travelled to Germany to visit the Fraunhofer Institute in Stuttgart and to find out more about the medical and industrial robots that are emerging from this collaboration

4:06 Raybon Kan and Don Donovan are on The Panel today - the rape culture marches at the weekend and what they'll achieve, the Air NZ sale, the new free-and-easy workplaces - how easy are they? The fuss over the Moslem school in Dunedin, the sentence given to the guys who brought the scorpions into NZ, and what your tweets tell prospective employers about you. They don't need to ask people to sit a test any more that betrays personality. They just look at Twitter.