1:10 Best Song Ever Written - Hilary Boyd of Auckland nominated Get Out of Your Lazy Bed by Matt Bianco.

2:10  The  Highlands Motorsport Park - Tony Quinn
A new motorsport facility that's been called one of the country's "good secrets" isn't set to remain so for much longer.
The Highlands Motorsport Park is a 20-million dollar complex, with a four-point-five kilometre racing circuit, located near the South Island township of Cromwell.
An opening festival held over the long weekend attracted some 7 to 8 thousand people on Saturday alone - and featured laps by about 60 vehicles... Including a first record lap of 1 minute, 41 point 9 seconds, set by Kiwi driver Craig Baird.
The Central Otago District Mayor Tony Lepper referred to the park - which also boasts a motosport museum and a go-kart track - as, until now, a good secret.

2:20 Women of the Hill - Denniston Plateau - Twenty years ago, two residents on the West Coast's Denniston Plateau initiated the restoration of an old schoolhouse to create a museum. This not only gave the many visitors to the hill a place to land, it became an important centre for the people who had been part of the once-thriving coal mining community around what was known as the 8th Wonder of the World – the Denniston Incline. Friends of the Hill has members around the world that gather here bi-annually, because of a deep connection to the place.
Gary and Sylvia James continue to welcome visitors to the Friends of the Hill Museum, and show them through the mock-mine built by local miners (complete with a replica horse).
The role of women in the plateau's bygone towns has often been overlooked in history but is celebrated here, as Sage Forest discovered when Sylvia takes her to visit a memorial to the Women of the Hill. 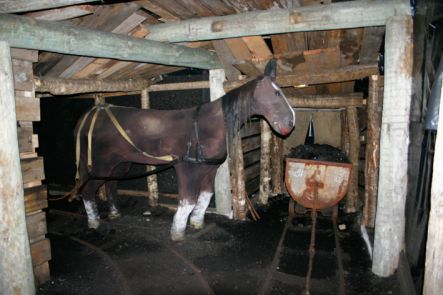 A replica of the last mining horse, Nugget, made by local children.

2:30 Reading - Peter Corrigan reads  today's short story - 'Faith, Hope and a Little Bit of Luck' by Jean Adeane.
A late middle-aged couple both have secretive flutters - he on the ponies, she on the Lotto.

3:10 Tune Your Engine - Is google making us stupid?"  Nicholas Carr is a famous technology commentator and his most recent book is The Big Switch: Rewiring the World.  Are we losing our ability to think deeply because of the internet?

3:30 In today's Asian Report, Lynda Chanwai-Earle is 'Moving on Asia' when she checks out 200 video works from Asian artists across the Asian Regions at the City Art Gallery, Wellington.