Afternoons with Jesse Mulligan for Tuesday 3 May 2011

Bless This House, as chosen by Judith Pellow of Onewhero.

Sarah McMullan channel surfs to find where the best royal wedding coverage was.

Nicky Pelligrino reviews what she's been reading lately:
When God Was a Rabbit by Sarah Winman
The Particular Sadness of Lemon Cake by Aimee Bender

Nick Atkinson has discovered a new Blue Collar band from Flint Michigan and Ele Ludemann also looks at books, the one's your kids should perhaps be reading.

The 50 books every child should read.

Dr Karl Pillemer, a gerontologist at Cornell University, has done studies that show that while a mother might tell her children she doesn't have favorites, but she actually does. And that can have lasting effects on her children.

The Orphan Gunner by Sara Knox, read by Deana Elvins.

Mavis Staples - You Are Not Alone 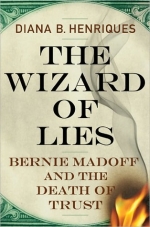 On June 29, 2009 Bernard L Madoff was sent to prison for 150 years after pleading guilty to the largest fraud in Wall Street history. He was the mastermind of a 20-year Ponzi scheme which collapsed in 2008 with thousands of victims and paper and cash losses of more than $100 billion.

Diana Henriques of the New York Times was the first reporter to visit the disgraced financier in prison. Details of those visits and interviews with more than 100 sources form the basis her new book, The Wizard of Lies: Bernie Madoff and the Death of Trust.