The Girl from Yesterday by the Eagles chosen by Dr. Tom Miller, Department of Medicine University of Auckland.

New music to listen to by Nick Atkinson:
Southern Girl by Rahzel Feat and Erykah Badu
Clean Sheets And A Fish Bow by Andrew Keoghan

Noelle McCarthy with another look at the blogosphere, and in particular how to avoid people, and happiness...everyone is trying to find it..on the internet.

Vanda Symon is a Dunedin-based author, regular book worm and contributor to our show, and she joins us now to talk about two books: The Passage by Justin Cronin, and A Life on Gorge River by Robert Long.

In just a few hours, rare Napoleonic memorabilia discovered at roadshow in Rotorua will go on the auction block. The items include a lock of Napoleon Bonaparte's hair. The historic treasures belong to descendants of Denzil Ibbetson, an artist and chief commissary officer on the Atlantic island of St Helena. Napoleon was kept on the island under British detention for six years until his death in 1821. Ibbetson's son Frederick came to New Zealand in 1864.

New Zealand - the crab capital of the world. A study by NIWA has discovered new species of king crabs in the New Zealand, Australian, and Ross Sea regions. There are now 23 identified species, almost doubling the number of previously known in the area.

See a gallery of images of king crabs. 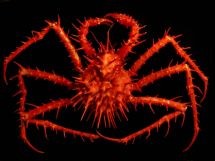 Animals and Other Crackers written by Anthony Steemson recalling some of the non-human companions that shared his youthful days on a small farm at Pahoia, near Tauranga.

As part of the Matariki celebrations at Te Papa, kaumatua from the east coast township of Tokomaru Bay took part in the recent cultural festival for "very experienced" performers. Ana Tapiata talks with John Coleman about their song Matariki, which was written 50 years ago.

Between anxiety, bullying, family break-ups, peer pressure and the minefields of sex, alcohol and drugs, the teenage years are a significant challenge, not just for young people themselves, but for the parents and carers who seek to support them.

Author Melinda Hutchings has learnt this from her own experience, and also from the many hours she's spent talking with teenagers, their families and the support people who work with them every day. It Will Get Better is the encouraging title of her book.

Shanghai-born author Olga Hawkes now calls Christchurch her home, but her connection to her rich Russian heritage runs deep. She has recently published a book- Russian at Heart which explores the experience of her mother's journey to escape from Bolshevik Russia. Sonia Yee takes a look into Olga's own personal journey as a young girl following her mother from Shanghai to America.

A chemistry lab seems an unlikely place for a battle, but that's where 40 secondary school students sweat it out over burettes and pipettes to see who will win the annual Titration Competition, hosted by Victoria University and The Wellington Branch of the Institute of Chemistry.

It's been a long time since Ruth Beran did a titration, so to brush up on her practical chemistry skills, she meets Outreach Co-ordinater Suzanne Boniface, who starts by reminding her what a titration actually is, and how it's done.

Brian Edwards and Graeme Bell. The efficacy - again - of stopping smoking in prison; Chocolate as a treatment for strokes; Did Wayne Rooney lose his footballing strength because he shaved his chest?; The value of the wharewaka on Taranaki Wharf that Wellingtonians are shelling out an extra 200k for; The value of swapping Kiwi for pandas from China... and which zoo will get the pandas anyway?; And John Banks spends ratepayers money on lunches and coffee having sworn never to spend a cent of ratepayers money on lunches and coffee.