RNZ Pacific has one transmitter – a 100kw digital capable (DRM) short-wave transmitter. We have retired our original 100kw analogue transmitter. It is now used for backup in the event of a fault in the main transmitter.

Our transmission site is at Rangitaiki, 41km east of Taupo in the centre of the North Island of New Zealand. The coordinates are 176 25’ 47.02” E  and 38 50’ 33.35” S. Audio is fed to the transmitters by a digital link from the studios in Wellington, 400km south of Taupo. The transmission operation includes a control and telemetry system operating through a standard RS232 computer port. The site is unmanned and is controlled from our studio in Radio New Zealand House, Wellington.

The Thomson Broadcast and Multimedia digital capable transmitter was installed in 2005. It is used to provide a studio quality DRM signal for relay by local Pacific radio stations.

The analogue transmitter was manufactured by Thompson CSF of France and installed in 1990. It is now only used for backup. It has an output power of 100kw and is equipped with three transmitting tubes; 2 x TH581 with hypervapotron cooling and one TH581 with air cooling.

Our studios are located in Wellington. At the start of 2000 we moved to a digital presentation system for all programme making and broadcast tasks.

We operate two high frequency and two low band antennae manufactured by TCI of California. One of each beams 35 degrees and one of each beams 325 degrees. They can be driven individually, or when fed in parallel the beam widens to 140 degrees.

It consists of four dipoles arranged in two columns of two dipoles. The average take-off angle is 12 degrees with a gain of 16 db at 6 MHz increasing to 19 db at 12 MHz. The antennas are fed with 300 ohm open line feeders with a complex matching and switching system.

A large reflecting mesh forms a backdrop to each antenna array and the tension on the dipoles is maintained with a system of pulleys and counterweights.

With the antennae combined, virtually all the Pacific Basin is covered. 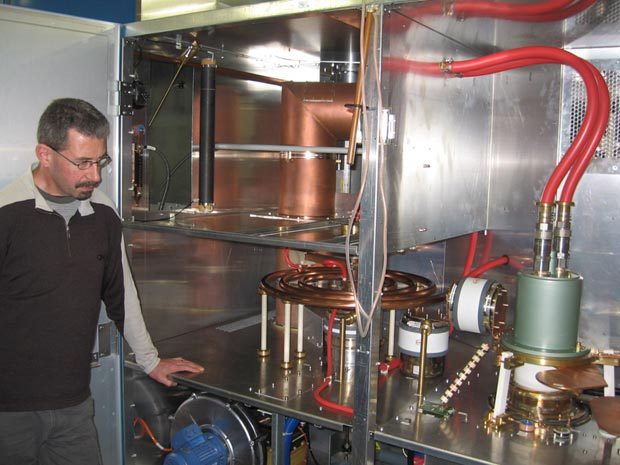 About our transmitters
Technical information about our broadcast equipment