Papua New Guinea's government has been urged by the international community to address persistent criticisms of its human rights record. 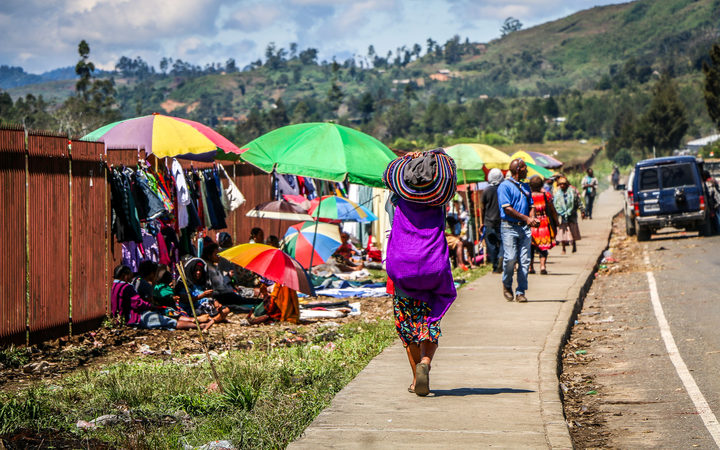 A street in Port Moresby, the country is one of the poorest in the Pacific. Photo: RNZ Pacific/ Koroi Hawkins

According to Human Rights Watch, the UN review made it clear that PNG's government hasn't followed through on some of its key past pledges to the UN Human Rights Council.

There was concern voiced over the country's record on gender-based violence, retention of the death penalty, and laws that criminalise same sex relations.

More than 15 nations questioned Papua New Guinea's retention of the death penalty, from Finland to Spain, Iceland to Fiji.

"With LGBT rights, we would definitely call for de-criminalisation of same-sex relations, and also the introduction of anti-discrimination legislation to protect vulnerable people in this community."

At the UPR, several countries raised PNG's failure to reduce incidents of gender-based violence, and the lack of female representation in politics.

More than 1.5 million people experience gender-based violence in the country each year, and prosecutions and convictions remain low.

McLennan said one of the most critical recommendations HRW had was for PNG to prosecute perpetrators and hold them to account.

In terms of women's rights, she said some basic first steps were required from government to confront the deeply entrenched patterns of rights abuses against women and girls in PNG.

"Really simply, things that we need from government are domestic violence shelters, they are few and far between, and are mostly run by NGOs, church groups and other really honourable human rights defenders operating in a voluntary capacity," McLennan explained.

"But also, we need qualified counsellors, we need more doctors and nurses to treat survivors of these crimes, we need legal aid - so lots of things to work on."

Italy and Cyprus pressed PNG about sorcery accusation-related violence and urged the government to take steps to prevent such attacks and to prosecute offenders.

HRW said that between May and June, groups of men violently attacked at least five women they accused of "sorcery" - one of the women was killed. McLennan expected the real number of attacks would be higher.

PNG's government has added murder following accusations of sorcery to the list of crimes punishable by death in recent years.

India said that the PNG government should improve access to health care for children in rural communities, and two countries urged the government to raise the age of criminal responsibility from the current age of 10.

The US and Zambia urged Papua New Guinea to investigate instances of police brutality.

Meanwhile, Human Rights Watch also called for PNG's government to ensure it has inclusive and accessible education for all children, including those with disabilities.

Sarufa said implementing the recommendations made by the council was "highly important" to PNG.

"A good proportion of these [issues] have been addressed by my government - albeit at varying levels - however there is also room for improvement."

Sarufa said further progress was being hampered by continuing resource constraints, which have been worsened by the pandemic.

He welcomed recommendations by council members that the country be given technical cooperative assistance through partnerships, including with UN programmes.

"We are optimistic that the lessons we have learned from this UPR process will help us do better in the future."