French Polynesia's former president Gaston Flosse has been sentenced to six months' home detention for filing an incomplete declaration of assets and interests in 2014.

Flosse should have been jailed but because he is 90 years-old, he can serve his sentence with an electronic bracelet at home in Tahiti.

Last month, the court in Paris heard that he had omitted to declare a $US1.1 million stake in a property company, $US260,000 in a savings account and 138 art works estimated to be worth almost $US300,000.

The prosecution said given his previous convictions, Flosse should be jailed for a year, fined $US50000 and banned from any political office for five years. 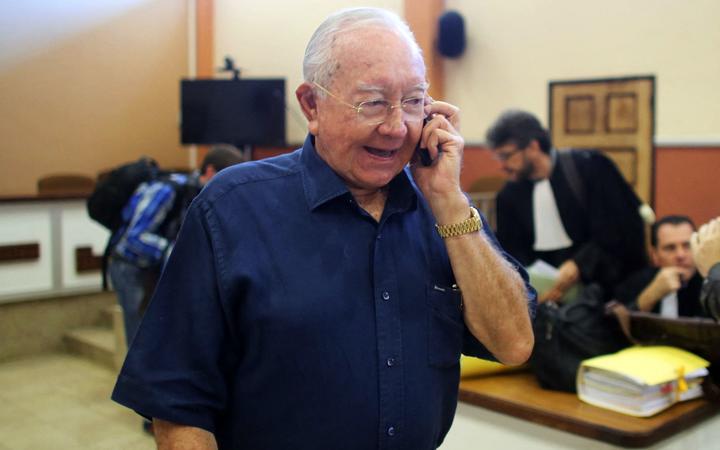 French senator and president of French Polynesia Gaston Flosse in 2014 in the appeal court of Papeete, during his appeal trial in which he is suspected to have received 1,6 million euros in cash between 1993 and 2006 to favour the companies of French businessman Hubert Haddad. Photo: AFP

Although the court found his offending to be serious, he was only given a six-month sentence as well as the fine.

While Flosse can appeal, his defence lawyer expressed general satisfaction with the verdict, saying his client wasn't found guilty of concealing any enrichment.

The defence had admitted there were errors and omissions, but no intention to defraud.

Flosse has several corruption convictions and has been banned from holding office since 2014 when he was stripped of his seat in the French Senate and then lost the French Polynesian presidency.

His last conviction for abusing public funds came in Tahiti in December when he and the current president Edouard Fritch were fined and ordered to jointly settle a water bill of $US820,000.

The scheme to supply a few homes for free but to make the public pay was arranged by Flosse and continued by Fritch in their roles as mayors of Pirae.