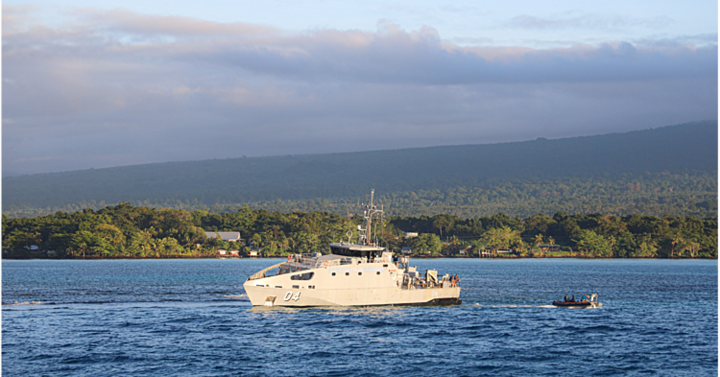 A police investigation into the grounding of the Nafanua II vessel patrol boat in Samoa has led to the suspension of an officer.

Superintendent Sefo Faafoi Hunt, who was the vessel's commanding officer, has been suspended while a police probe and a commission of inquiry into the running aground of the patrol boat on a reef near Salelologa wharf on Savaii island continues.

The vessel, which was only commissioned in 2019, ran aground nearly four weeks ago after transporting police officers from Apia to Savai'i to help their colleagues there during a Human Rights Protection party protest.

The HRPP plan to travel around Savai'i did not succeed after several villages in Savai'i put up road blocks to show resistance against the political party's attack towards the judiciary.

A crew from Australia who will carry out the salvage operation is due to arrive in two weeks time.

A 36-hour mock lockdown is underway in the Solomon Islands capital Honiara.

People living in the Honiara Emergency Zone are required to stay at home and not interact with anyone outside their bubble, while only essential businesses are allowed to operate.

If anyone has to leave their home for essential travel, they are required to wear a mask and practice social distancing from others.

Meanwhile, in response to criticism of the government's decision to have the mockdown, the Attorney-General John Muria Jnr said it had repeatedly made public statements on the purpose of, and need for, the exercise.

The government says the exercise, which is scheduled to end at 6am on Tuesday, is required for the country to prepare itself for the threat of the Covid-19 delta variant.

Muria said the mock lockdown orders were valid and constitutional, and any breach of such orders will result in criminal proceedings.

Guam has confirmed 109 new Covid-19 cases - the fifth day in a row that the territory has more than a hundred new cases in a day.

Over the weekend , the Guam's Governor Lou Leon Guerrero announced sweeping changes to try to curb the fast-spreading delta variant.

She also announced a limit on social gatherings to no more than 10 vaccinated individuals indoors and 25 vaccinated people outdoors, effective today.

The Niue government is looking at new ways to raise revenue as it struggles to make ends meet.

But he said he had been in talks with the Asian Development Bank and the IMF on strategies for generating income in small island states.

This has led the government to contemplate moves such as charging for hospital services, in what Tatui said was likely to be the first of a number of new levies.

"Minimum health charge fees for the services to the public. These services are now provided free by the government," Tatui said, adding that charging for water supply is also being considered.

"Because we are having reduced revenue with tourism affected we continued to face that problem of a substantial reduction in revenue. So we must have other avenues to look at to assist our revenue stream overall."

Japan's government is providing approximately 60,000 doses of Covid-19 vaccines to Solomon Islands, through the COVAX facility.

The doses of AstraZeneca are manufactured in Japan, and are being donated as part of assistance promised by Japan at the Ninth Pacific Islands Leaders Meeting nearly two months ago.

At PALM9, Japan announced its intention to provide Pacific Island countries with a total of approximately 3 million doses of Covid-19 vaccines by around the end of the year.

A Japanese Ministry of Foreign Affairs release said the vaccines were scheduled to arrive in the Solomon Islands late last week.

The Solomons government said that so far, the country has administered almost 74,000 doses of the AstraZeneca and Sinopham vaccines.

New Australia visa could be a threat for Pacific workers

The Australian National University's Stephen Howes said the new Australian Agricultural Visa scheme could undermine two existing schemes that have become cornerstones of the economies of a number of Pacific countries.

Professor Howes said if the Australian Agicultural Visa was not implemented with same types of safeguards as the Seasonal Worker Programme and the Pacific Labour Scheme, then many farmers across Australia were likely to switch to the new visa.

"Although its termed an agricultural visa it is actually going to allow employers to bring in workers, not only for agriculture but also for other regional industries, including meat processing, and meat processing jobs are actually 71% of Pacific Labour Scheme jobs.

"So those employers shift away from the PLS for the new visa than definitely the PLS is at arisk of collapse," he said.

Professor Howes, a Professor of Economics at the ANU's Crawford School of Public Policy, said the new visa had been pushed by the Nationals ahead of the next election so candidates could go to their rural electorates saying they're doing something about worker shortages.