Two Indonesian military personnel are to face censure for their brutal treatment of a deaf West Papuan man which sparked outrage this week. 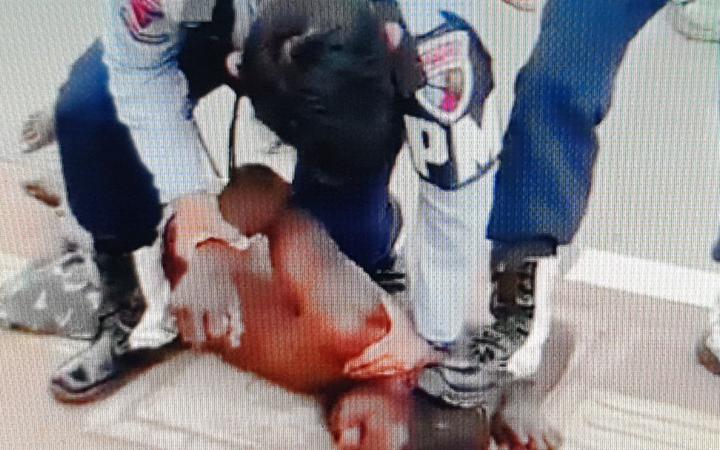 Two Indonesian military personnel are to face censure for their brutal treatment of a deaf West Papuan man. Photo: Supplied

Footage showed the two Air Force members apprehending the man they claimed to have suspected was drunk while at a food stall in Merauke.

The pair manhandled him and pinned him down with force, including a foot held on his head on the ground for a sustained period.

It was caught on video and shared widely online.

Indonesia's military command has told media that the pair took inappropriate action against the man and will be duly punished.

A government official also confirmed it today during a webinar on West Papua in which Jakarta's record on human rights in the region was defended.

Responding to the misunderstanding incident which occurred on Monday, the Indonesian Air Force expressed regret and apologised for the incident.

It said there was no excuse for military members for breaking the law and harassing people.

The incident has been compared to the highly publicised death of Black American man George Floyd in the US last year after a white policeman, Derek Chauvin, pressed his knee on Floyd's neck as he lay face-down in the street.

It garnered global attention and gave momentum to the Black Lives Matter movement, which has also been co-opted under the Papuan Live Matter cause.

According to a West Papuan academic, the attack on the young Papuan man is not uncommon in Papua region.

"These incidents are not isolated incidents - they are just the tip of the iceberg of what Papuans have been facing for 60 years under Indonesia's rule," said Yamin Kogoya, who has a Master of Applied Anthropology and Participatory Development from the Australian National University.

"Tragic footage like the one in Merauke attracts public attention only because someone captured it and shared it. Most inhumane treatments in remote Papua's villages rarely get recorded and shared in this way."

Kogoya said the video of the inhumane treatment of the deaf Papuan man this week in Merauke reminded him of many horrible things he witnessed while growing up in the highlands of Papua.

"Growing up in a highland village, I witnessed these barbaric behaviours by members of Indonesia's armed force. They were walking around in uniforms with guns; they did many horrible things to Papuans - as many as they wished, without consequence."

He said unlike the death of George Floyd, crimes such as that filmed in Merauke "hardly get resolved, and perpetrators walk free while victims get punished".

Kogoya said that although Jakarta already apologised for the Merauke incident, empty apologies alone would not solve Papua's protracted conflicts which relate to serious gross human rights violations stretching back decades and the deinal of West Papuans' self-determination rights.