Power blackouts are being experienced across Papua New Guinea as workers of PNG Power stage a sit-in protest today.

The Post Courier newspaper reports the president of the Energy Workers' Union, Eddie Gisa, saying workers are asking the board and management of PNG Power and the government to address their demands set out in a petition handed to the board on Wednesday.

The paper reports the managing director of PNG Power, Flagon Bekker, addressed the workers this morning outside their headquarters in Hohola promising to look into their grievances and appealing to them to return to work.

Power outages are a common occurence in the capital Honiara so most businesses have standby generators installed as do many residential properties.

It warned that any person found in possession of an unlicensed standby generator would be liable for prosecution.

Solomon Power said it would be conducting a mass survey of all standby generators on its existing networks across all provinces.

Surge in vaccinations linked to raffle

The Department of Health in American Samoa has seen a healthy surge in Covid-19 vaccinations in the last week.

An RNZ Pacific correspondent reports nurses believe the 'Protect As One' vaccination raffle, which is offering $US 250,000 in prizes, is the reason. 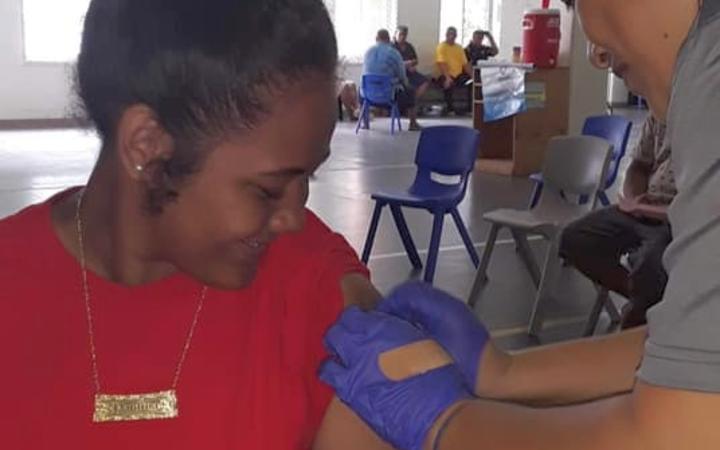 As of Monday this week the coverage for fully vaccinated persons had reached 50.5% of the population.

Health authorities say a full vaccination rate of 80% is needed for herd immunity.

At the Tafuna Community Health Center on Wednesday, nurses told KHJ News a large number of adults who missed appointments for their second shots have come in to get their final dose.

They believe the raffle was the incentive for them to get fully vaccinated.

The 19 Vanuatu government MPs whose seats were declared vacant by the former speaker of parliament Gracia Shadrack last month are challenging the decision in court today.

Under Vanuatu's electoral laws members of parliament are allowed to challenge vacation declaration in the Supreme Court.

The Vanuatu Daily Post reports the first conference to hear the petitions of the 19 MPs started on Thursday morning at the Supreme Court Registry.

The government MPs concerned have been able to access this facility thanks to a split decision by the Vanuatu Court of Appeal which granted them the right to challenge their seats being declared vacant but stopped short saying the former speaker had erred in declaring them vacant.

The decision ordered "the Supreme Court and the parties to proceed urgently to a hearing of this petition."

Fight for independence 'not over' says Bougainville president

The Bougainville president said the island's people must be ready to embrace the sweeping political changes the Autonomous Government has undertaken as it prepares for political independence from Papua New Guinea.

Ishmael Toroama made the statement while the launching what his government is calling 'the Independence Ready Mission Implementation initiative' in the Tsitalato constituency yesterday.

Mr Toroama said "change is imminent on Bougainville. The government has set a course for reform and change in our system of government and society and this will have a direct impact on our people."

He said this change is what the people chose when they rejected autonomy and opted for independence during the referendum.

Mr Toroama said Bougainvilleans need to remember the fight for independence is not over.

He said this is a battle not with weapons but a fight where the people's intellect and ability to unite and progress is at the fore.

Mr Toroama said progress on Bougainville's independence aspirations will require the support of the people through participation in development and adopting social responsibility standards.

A Samoan environmental student is using part of her research under the Fulbright Scholarship on a project to save the manumea, the national bird of Samoa.

Sefuiva Moeumu Uili is the project manager for Samoa Conservation Society's Save the Manumea Project, which has upped its efforts to locate the near extinct rare bird with the placement of video and sound recording equipment across Samoa's rainforests.

Sefuiva said the team spent three weeks working in 26 villages to try to find the manumea.

The Samoa Observer reports there have been three confirmed sightings of it this year.

The project was made possible through a grant of over 140,000 tala which the Society recently received from the Biodiversity and Protected Areas Management Programme.