A large crowd of women singing songs and waving signs lined both sides of the road leading to the Courthouse in Apia where the Samoan Court of Appeal is hearing an appeal by the Electoral Commissioner and HRPP candidate, Aliimalemanu Alofa Tuuau. 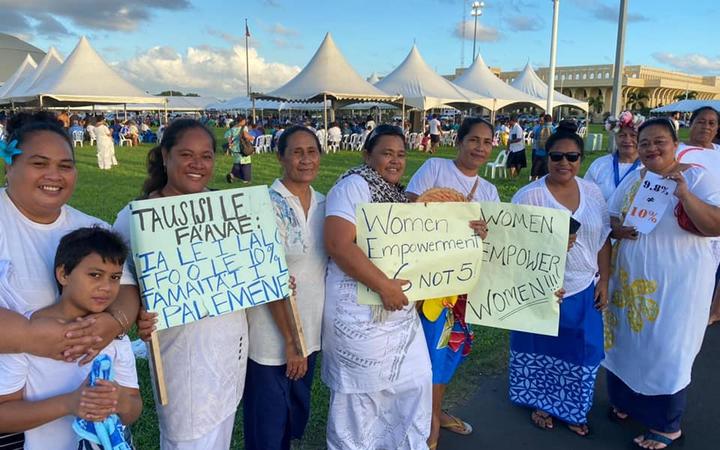 Protesters at the march in Apia Photo: HRPP

Aliimalemanu was an unsuccessful candidate in the 9 April election but was then selected by the commissioner to join parliament under the law that ensures 10 percent of parliament is comprised of women.

The appeal is against the Samoan Supreme Court ruling which declared that Aliimalemanu's selection was unconstitutional. The court then nullified and voided her appointment.

A court decision on the appeal is expected some time this week.

The leader of the march is former MP representing the HRPP, Maiava Visekota.

"It's taking away what our daughters are entitled to. There's a lot of young women here, students and young girls," she told the march.

"This is a historic occasion, women don't just come out for any reason; these women have come of their own free will." 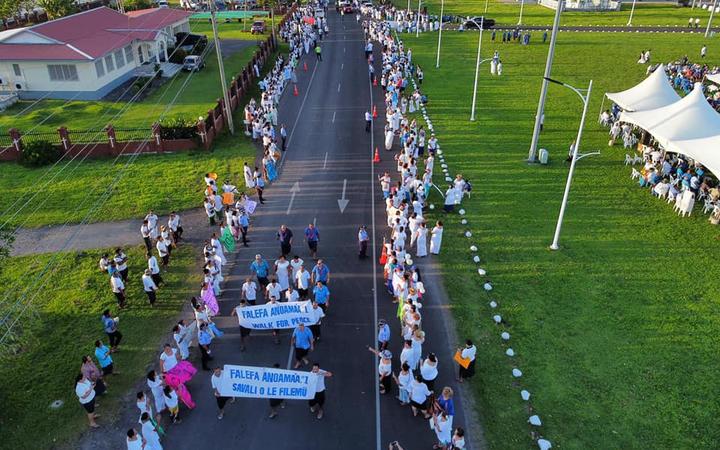 Protesters line both sides of the road to the Apia courthouse, Photo: HRPP

Tuilaepa urged to accept the decision

Samoa's caretaker prime minister Tuilaepa Sailele Malielegaoi has been told to accept the decision on an appeal by the HRPP being heard in the Court of Appeal on Monday.

The call came this morning at a meeting of party supporters to get an indication of the direction the party should take.

Held at Tiafau, the traditional seat of government, chiefs and orators from the trade districts were invited to give their opinion on the constitutional crisis facing the country.

Maulolo Tavita Amosa, speaking on behalf of chiefs and orators of Upolu island, told the hundreds in attendance they supported the six women members for parliament.

"Tuilaepa, our plea is, whatever the result of the appeal, accept it," he said.

Chiefs and orators of Savaii had earlier given Tuilaepa and caucus their solidarity and full support whichever way they decide on.

Tuilaepa said Samoa's deep connections to culture and religion would eventually bring harmony back to democracy.

An exchange of views followed, between matai from the two islands Upolu and Savai'i.

All this comes as Samoa commemorates its 59th year of independence tomorrow.

Lau afioga Namulau'ulu of the Safotulafai village spoke for his constituents saying a second election would make use of Samoa's sovereignty.

The United Nations Human Rights Council has expressed concern over the challenges to the rule of law in Samoa.

It is urging that the rule of law and democratic institutions in Samoa be respected and protected.

In stresses the key role played by an independent judiciary, saying Samoan judges must be able to undertake their functions without pressure, interference or personal attacks from any quarter.

Samoa is a party to the International Covenant on Civil and Political Rights since 2008 and has thus committed itself to safeguard access to justice and the independence of the judiciary.