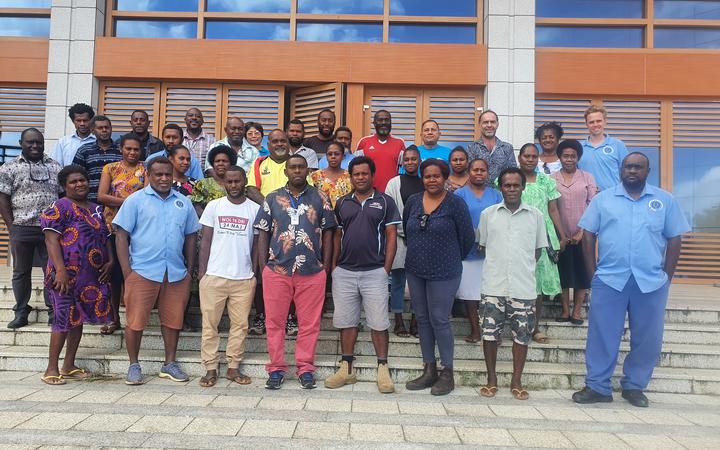 Nurses from Vanuatu's island of Efate and offshore islands during their training for administering the AstraZeneca Covid-19 vaccine. Photo: Hilaire Bule

Over 4,000 people in Vanuatu's capital Port Vila, the island of Efate and offshore islands have registered to receive vaccination against Covid-19.

Last week 24,000 doses of the AstraZeneca vaccine arrived in Vanuatu, sent from Italy through the COVAX facility.

The manager of the country's Expanded Program of Immunisation, Simon Samson, says the majority of those to have registered are front line workers in sectors such as immigration, customs and health.

Samson said it wasn't only ni-Vanuatu who responded to registration, but also foreign nationals who reside in Port Vila.

He said training has been conducted for nurses of Vila Central Hospital and health staffs for Efate and offshore islands to administer the vaccines.

The vaccination will start on 2nd June, after the official launch.

Speeding on Niue becomes infringement rather than crime

From next Tuesday it will no longer be a crime to speed in Niue.

Rather the offence, along with other minor traffic violations, will become an infringement.

The June 1st changes, passed by Parliament six years ago, will bring Niue into line with many other nations.

The police chief, Tim Wilson, said that by taking these violations out of the court system there would be a huge saving in time and effort for police, prosecutors and the offender.

"The other thing this does is it actually them infringements instead of crimes. So speeding and that stuff before, apart from you could go to prison, was still listed as an offence or a crime under the Transport Act.

The Samoa Observer reports that the project was halted last August after complaints from consumers led to the discovery of a problem with the Firmware the system uses.

He added that the corporation has completed smart meter Firmware upgrades for meters already installed during the pilot trial.

Last year, the Office of the Regulator then did a survey among residents who were using newly installed smart meters, and feedback showed problems with its use.

"We have also received the endorsement from the Regulator to restart our project," he said.

"Right now we do not have any more problems as previously reported in the beginning," Faumui said.

"The work we are doing right now is for the betterment of all of Samoa and not just for the E.P.C. and a small group. It is for the general good of the whole nation."

The StarKist cannery in American Samoa, the territory's main economic driver, has been forced to reduce shifts as it faces challenges to secure workers.

For two weeks, the cannery will begin operating just one shift, instead of its usual three.

The reason for the reduction, according to Vice President Michelle Faist, is due to "the ongoing challenges to secure workers at the plant."

She says the governor and his team have been notified.

StarKist management and American Samoa government leaders have said that since the receipt of stimulus checks and increased benefits as a result of Covid-19 federal funding, absenteeism has been high.

The cannery says it has been forced to siphon off some of their production off-island as a result.