Papua New Guinea police are warning of a "whole-out war" in Eastern Highlands province after 19 people were killed in tribal violence.

The Guardian reports that the violence last Thursday and Friday in Kainantu District involved high-powered weapons, as well as a hand grenade. 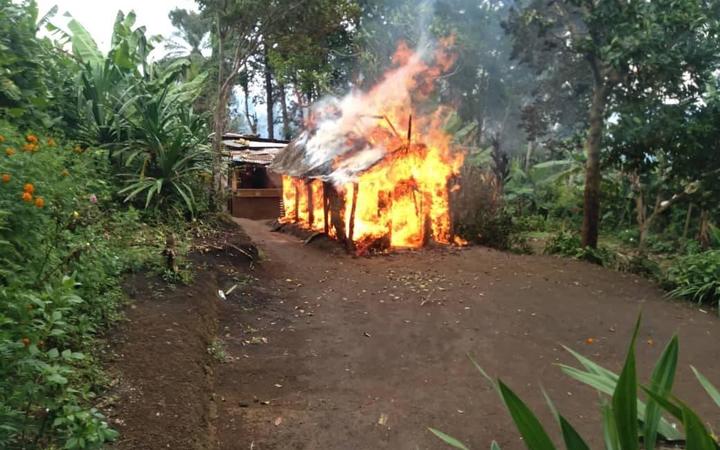 A number of homes have been destroyed in the days after a deadly tribal fight exploded in PNG's Eastern Highlands province, 8 April, 2021. Photo: BTT Newscast

The fighting between the Agarabi and Tapo clans, stemmed from a land ownership dispute.

As well as the nineteen dead, police say many more people are unaccounted for, and a number of properties have been destroyed.

The fighting paused on Saturday and Sunday as the tribes observed the Sabbath.

But Provincial Police Commander Michael Welly said there were signs that the fighting would resume this week as a "whole-out war".

He has told PNG's Police Commissioner David Manning that without police reinforcement, more lives are expected to be lost.

Manning later said a 15-man team from the Northern Mobile Group had been sent to help local police restore peace.

As well, a mobile police squad from Lae had also been deployed to the area and was due to arrive by Monday.

Meanwhile, a journalist in Eastern Highlands, Benjamin Tabie, told RNZ Pacific late Monday that police had dispersed in two groups to negotiate with the warring tribes.

"They met with locals, the community leaders. The negotiation is still ongoing," he explained.

"Right now they are trying their very best to calm the situation. But the two neighbouring tribes, tension is still very high at the moment."

Tabie said the dispute between the tribes over what appeared to be a land grabbing problem was a conflict that dated back generations but had descended into a cycle of pay-back killings.

"This kind of mentality is already installed in their people nowadays, especially the youth," he said, adding that rather than go through the courts to address their land dispute, the tribes tended to take law into their own hands.