New Zealand's Pasifika community has been living and working on the front line of the Covid-19 pandemic, since the coronavirus arrived a year ago.

On the 28th February 2020, New Zealand announced their first confirmed Covid-19 case reported to the Ministry of Health.

Drew Leafa, the Operations Manager at Jet Park managed quarantine facility in Māngere, once worked for four years at a law firm before joining the hotel as a duty manager. 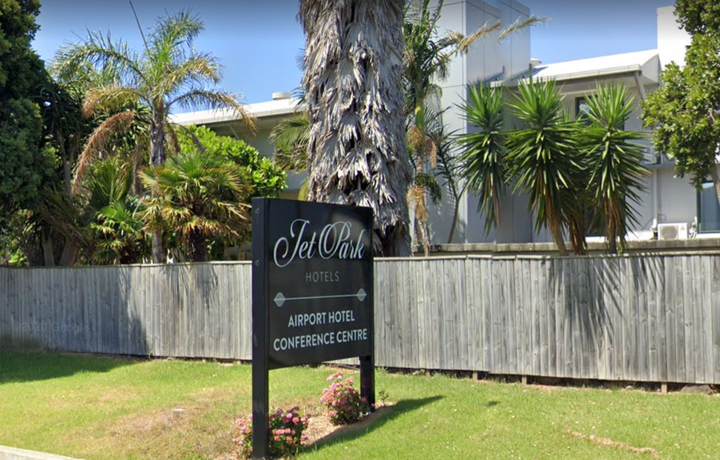 Leafa said within weeks of starting at Jet Park, the news of Covid-19 broke and operations at the hotel changed dramatically. He said , which was scary for the staff because of the unknown, but he said he was up for the challenge.

"I just jumped right into it and decided that this was something I wanted to help out in.

"I look back at it now and I'm glad I had a change of industry because I can reflect on this and be able to say I worked at a quarantine facility and helped with the fight of Covid-19," he said.

However, quarantine facility staff shared that they faced stigma from family and friends who knew of their work, which was difficult to manage at times.

Leafa said that was the difficult part of the role.

"Staff members were victimised once people caught on that they worked in a managed quarantine facility, which houses symptomatic people or people who have tested positive, and that wasn't nice.

"Staff who would be with their families or go to church or sporting events have been asked if they've gone to the doctors for a check-up to allow them to be at the event - it has taken a huge toll on the staff," he said.

"Where I get asked with a funny look, oh aren't you the operations manager at Jet Park? And I've had to respond saying, I'm with the Ministry of Health and that was hard.

"People would see the Jet Park logo on my uniform when I'm out in public and comment, and I would have to explain to them that actually, we are people who just trying to help, we are not the virus.

Leafa said it was the front-line workers' camaraderie, that had got them through the tough times. 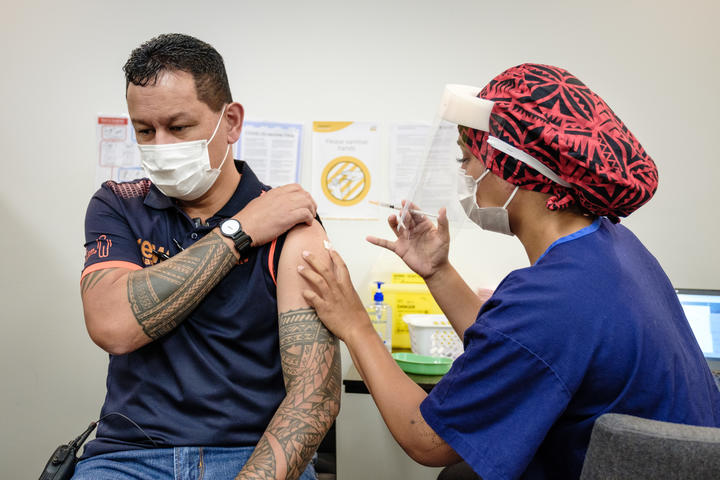 He has had to sacrifice some hobbies and commitments because of being a front-line worker.

He was the second border worker to receive the Covid-19 vaccination when the immunisation campaign kicked off in Auckland last month and he wanted to encourage the Pasifika community to get informed about the vaccine and get the jab.

"I didn't feel this jab and I found it easier to go through than the flu jab.

"There has been a lot of science and research put into this vaccine and I urge our Pacific people to take the opportunity to get vaccinated because in the long run, it's going to benefit us.

"When Pacific Islanders catch up with each other, we hug and kiss on the cheek as a way of saying hello and currently that's not the norm."

Leafa said he would love to go back to that soon, so the country could look at the rest of the world and say it had done its part.

The Chief Executive Officer of South Seas Healthcare Clinic, (or Siaola), in South Auckland said his team went from business as usual to virtual consultations and then opening a testing station within three days. 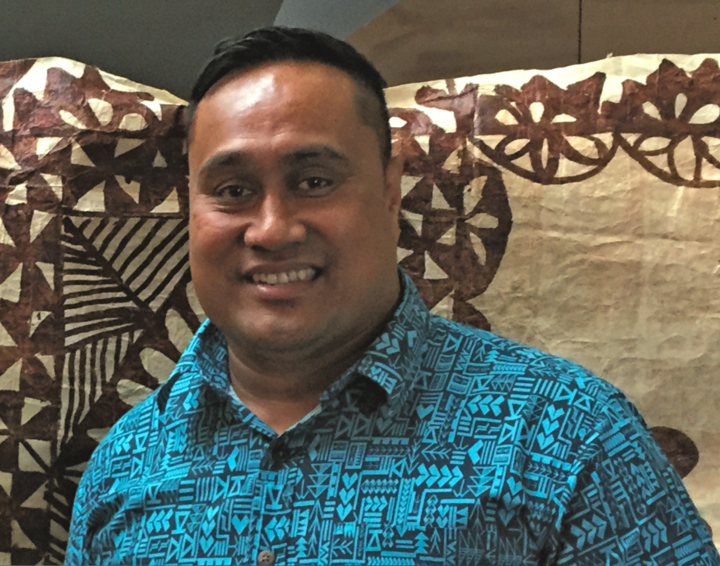 Lemalu Silao Vaisola-Sefo said what he was most proud of was the collaboration among different organisations from the District Health Boards to government officials to help manage Covid-19 related activities.

"Towards the end of 2020, the nurses and doctors were fatigue, but the common feedback I received from them all was that they enjoyed working with other nurses and admin from other providers.

"Our clinic has more collaboration with DHBs, ministries, government officials - Covid-19 has broken down those barriers between groups and allowed for us all to do what we've always wanted to do, which is work together," he said.

"Even within the community, from churches, sports clubs, NGOs, primary care, we all came together for that one purpose and that was to stomp this Covid-19 virus out."

Lemalu said he was proud of the fact that they had been able to provide additional support to families who would not necessarily have access to those services due to barriers such as being registered with a specific clinic to be served.

"At South Seas we now have a WINZ (Work and Income NZ) worker based at our GP to offer their services - who would've thought of accessing WINZ at a healthcare?

"People accessing food parcels are easier to do now than before because you used to have to meet a certain criterion to get a food parcel, not anymore.

"And if you wanted to access a mental health service, you would normally have to get your GP to refer you, but now it's self-referral," he said.

Lemalu had been getting tested for his family because I didn't want his my nana to get sick.

Dr Api Talemaitoga leads the communication for Covid-19 at the Ministry of Health and is a GP in Manukau and Christchurch. 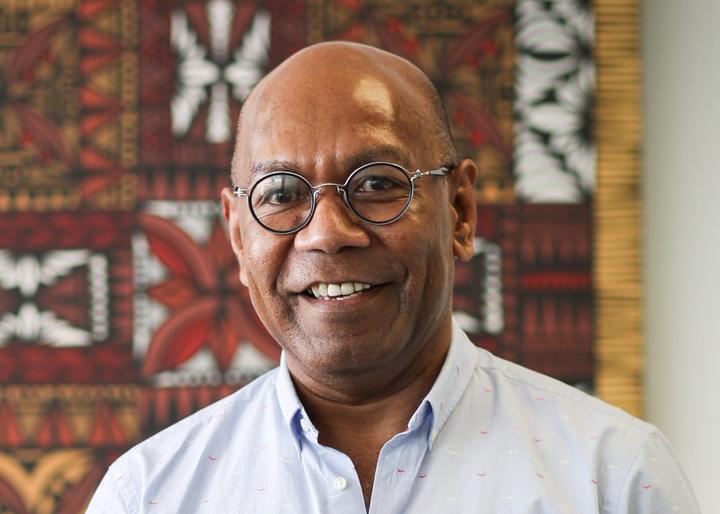 Talemaitoga said at the beginning of pandemic in New Zealand, there were long hours, with staff working seven days straight.

As he reflects on the year that has been, he said one of the proud moments of 2020 was how the Pasifika community responded to the government around getting tested.

"This is a community with high health needs who when the messages came out from us and the providers, people they trust, they turned up in droves to get tested.

"Sometimes I get a bit emotional when I think about what we heard with the people that came and got tested.

"We had young men coming in and when asked what brought them here, they would respond saying that are doing it for their family because they don't want their nana to get sick.

The Pasifika community had the highest testing numbers when it came to breaking down the population by ethnicity.

"I spoke with a 63-year-old grandfather who shared the sacrifice he makes at home as an airport worker. When he gets home from work, he must tell his grandchildren that he will hug them later as he needs to change his clothes and have a shower because he doesn't want to pass on the virus to them," he shared.

Church is a very important part of Pasifika peoples' lives and that too had to change due to the pandemic.

The Executive Director of Vahefonua Tonga Methodist Mission Charitable Trust said they had to close their churches during high alert level changes.

"Our elderly had the opportunity to watch not only their minister, but other ministers do their sermons as it was a shared responsibility with the church, and so we got a myriad of services running on Sundays and throughout the week. 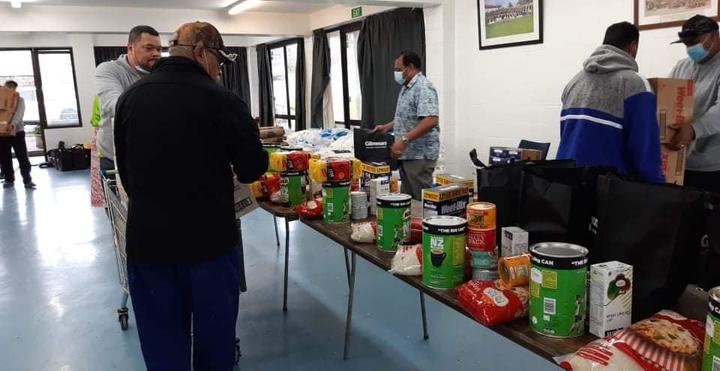 It was a busy year for Siaola as they provided food parcels, utility payments, face masks and counselling to support families in need.

"Around 94 percent of the families we worked with lived in crowded homes up, with some families having up to 13 people in a home, and that could be their own children or two to three families."

Tuai-Tau'fo'ou said it could be stressful at times for families, so the organisation tried its best to get help.

"We noticed in the beginning of this whole pandemic that the lack of information meant a high level of anxiety, which would lead to stress and could possibly result in family violence occuring.

"Working with government and providers right through to church leaders with the correct messaging in the appropriate languages was essential for our community and to put our peoples' minds at ease," she said.

Tuai-Tau'fo'ou was pleased with the efforts made by Siaola in partnership with other services such as the Fono who came together with church leaders and the Tongan community rapidly to ensure families in need received the right support for them.

It was easy for Siaola to mobilise our Tongan community by accessing church leaders and working with professional volunteers.

"Siaola works with different denominations within the Tongan community as well as families who do not attend church.

"We have also had the opportunity to distribute laptops, uniforms and stationary to students as well as school lunches throughout the Auckland region," she said.