Pasifika communities in the Wellington region have started 2021 with a vibrant celebration of their cultural heritage. 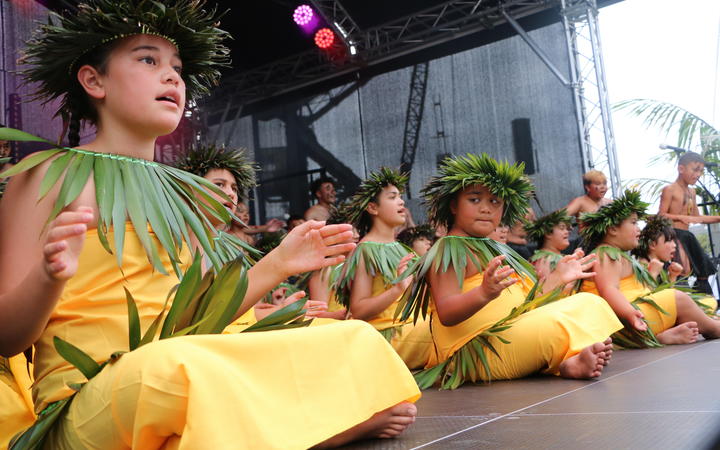 Thousands attended the Wellington Pasifika Festival on Saturday, thought to be the largest in at least a year, with Auckland's Polyfest and Pasifika festivals cancelled in 2020 because of the Covid-19 pandemic.

Festival goers were treated to Pacific music and dance, arts and crafts and delicious island cuisine.

But it is much more than just a festival to the people involved, such as the president of the Wellington Solomon Islands community Glorious Oxenham or 'Aunty Glo', as she is more commonly known.

"We've been doing this for 10 years. The very first year we just came down to have a look and they said where is your stall?"

"So the following year we combined with Vanuatu, Papua New Guinea and Fiji and we called ourselves the flags of Melanesia." 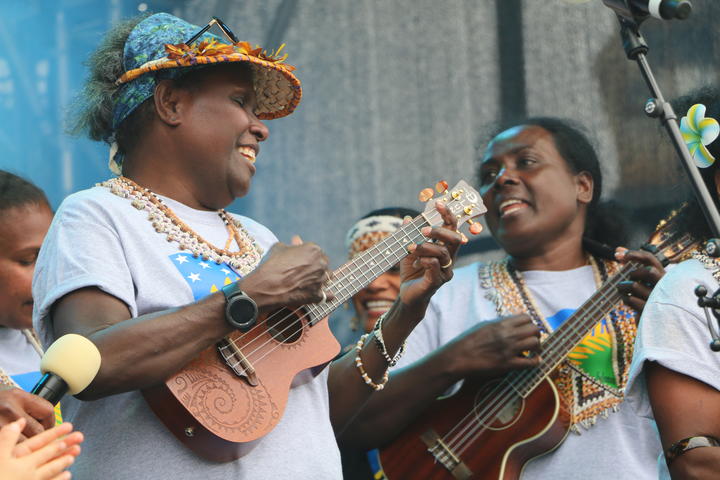 Glorious Oxenham, left, performing with the Solomon Islands community at the Wellington Pasifika Festival in January 2021. Oxenham has been honoured for her services to the Melanesian community in Aotearoa. Photo: RNZ Pacific / Koroi Hawkins

The Samoan community had by far the largest presence in the festival with multiple performances and many food and community stalls. 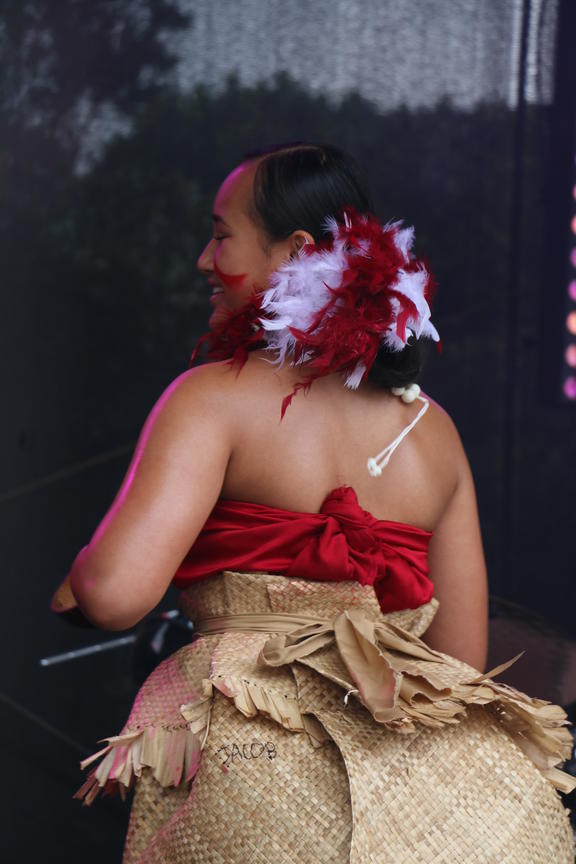 One of these groups was headed by Jayden Luapo and his partner Sophia Uele the founders of Tautua Dance who work with a lot of Pasifika youths in Wellington, Porirua and the Hutt Valley.

This was their fourth year at Wellington Pasifika but the first year they have had a stall of their own.

Luapo said the importance of celebrating Pacific culture in Aotearoa was driven home to him while he toured Europe earlier on in his performing arts career.

"The way that other people over there appreciated the Māori culture, Samoan culture and Cook Islands culture made us realise how important it was for us to teach our kids to love our culture.

"Because other people want to embrace it and they didn't even know what we were talking or singing about."

One group performing for the first time at Pasifika this year was the Vanuatu community and their string band.

Community president Roy Stephens said for their small community it was uplifting to be able to come together with other Pacific communities.

"These kinds of events are so important, because living in cities and towns we are so focused on our nine to fives and operating in our own little silos.

"Through festivals and community events we have an opportunity to reconnect, appreciate our cultures and our Pacific way and expand our networks. 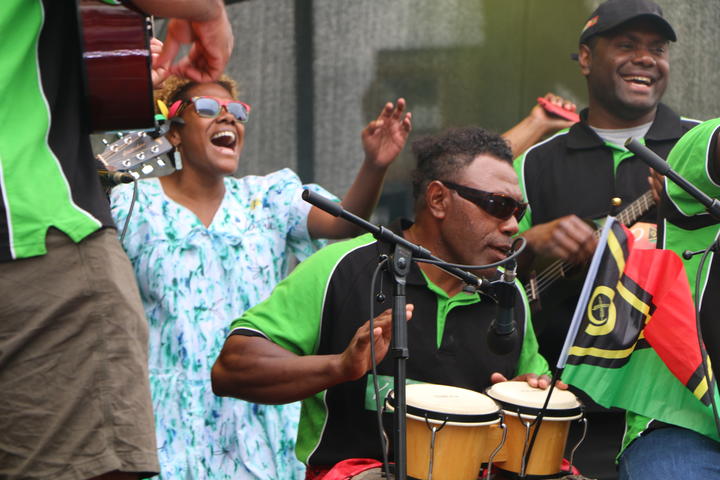 Festival stalwarts from Niue, sisters Maria Solouota and Tonie Ikivihi, believe having an annual event in Wellington is also important for the visibility of Pasifika in the wider community.

They urged more groups to get on board.

"Better to have this than nothing at all, and because Pasifika festival is ours we need to participate and make sure that we continue this for the next generation to come," Maria Solouota said.

"It's also putting us in the face of Council, in the face of Wellington as an identity a group of Pacific people; that we do have an impact and influence in the community," said Tonie Ikivihi. 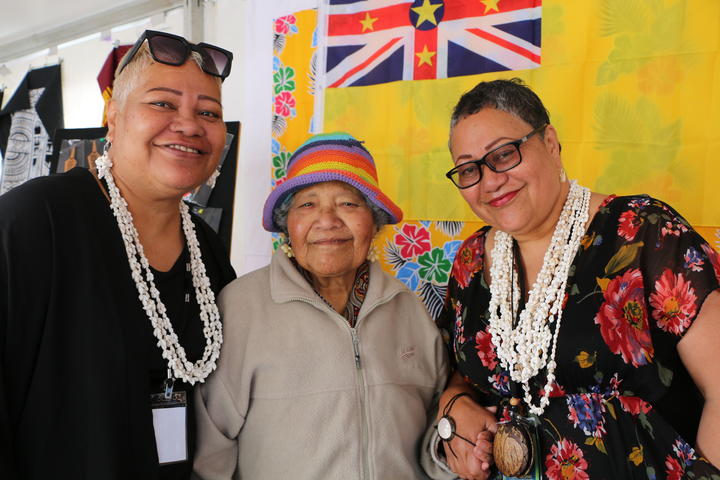 Mingling with the crowds and queuing up for steaming plates of sapa sui and ice cold 'otai were a host of Pacific leaders, including the minister for Pacific peoples Aupito William Sio, who was impressed by the turn out.

"So you can easily see the need for our people to come together, which is important," Aupito said.

But he also reiterated the need for Pasifika to remain vigilant so such events can continue to be held.

"We have to review all of our practices because we are one of the most vulnerable communities with Covid-19. Not only because of existing illnesses, but also our cultural practices: the sharing of food, the hugs and kisses.

All of that puts us at greater risk of infection," Aupito William Sio said. 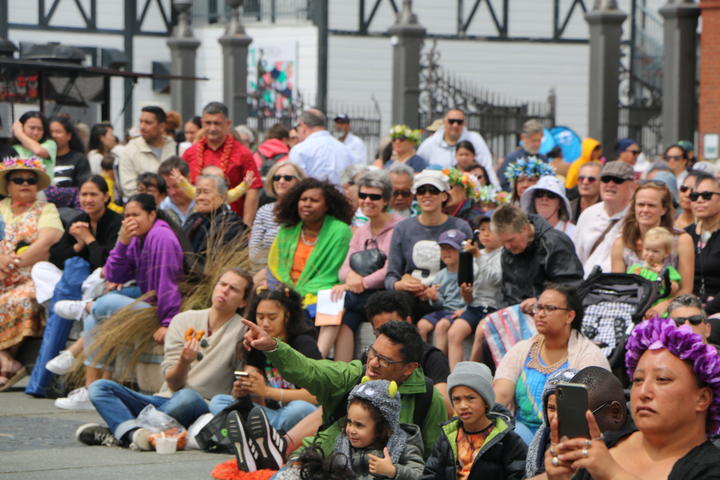 The biggest cheers on the day were for the youngest performers doing their best to remember their routines, as well as the oldest performers such as a nanas and poppas exercise group who dropped a TikTok dance for their finale, much to the crowd's delight.

"Pacific people are incredible, they've got talent, they are beautiful...they are performers, they are doing arts and craft, they do food, and the Pacific is the only place you can get those things.

"So I think it is a sense of gratefulness and appreciation for who and what we have around us," Tamaki said.

She said it was a great way to start the year and she hoped the Pasifika communities in years to come would continue to feel a sense of ownership and pride in the festival. 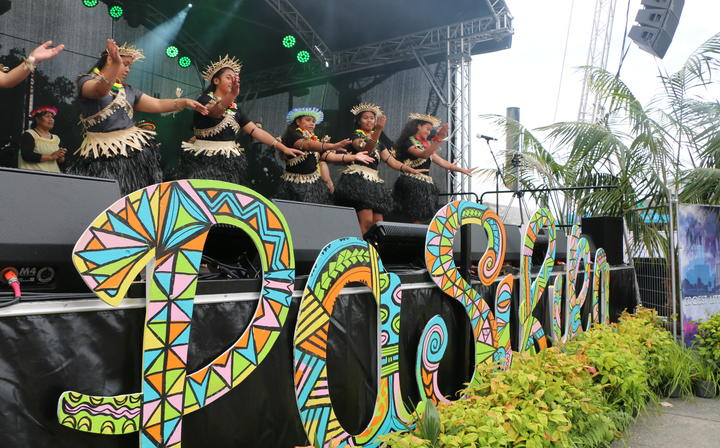