Pacific Islands Forum leaders have drafted a statement to be considered at the special session of the United Nations General Assembly on Covid-19 in December.

In its search for a collective response to Covid-19, the Pacific Islands Forum says there is a need to address the disproportionate impacts of the pandemic on vulnerable groups in the region.

Forum leaders aim to send a strong message to the world when they present a statement to be considered at the special session of the United Nations General Assembly on Covid-19 in December.

The document, Protecting the Health and Well-being of the Blue Pacific, is part of the region's response to the impacts of the global pandemic.

And driving this is the Pacific Humanitarian Pathway for Covid-19, Kofe said.

The ministers discussed the urgent need to look into how the pandemic had impacted vulnerable groups in the region.

Kofe said these groups included the disabled, the elderly, and women and girls.

"The Pacific Humanitarian Pathway for Covid-19 continues to drive an effective Pacific-led regional response as Forum nations look for similar collective responses to the widespread cost-cutting impacts of the pandemic," he said.

"Recognising the severe health and social impacts of Covid-19 on the Blue Pacific, ministers discussed their comprehensive list of further policy considerations for strengthening collective response efforts to the pandemic."

Call for equal access to Covid-19 tests, treatments and vaccines

The ministers also highlighted the need for co-operative multilateral projects to ensure equitable access to trusted and certified Covid-19 tests, treatments and vaccines.

Kofe said this ensured they were accountable and transparent procurement and distribution methods.

"And we have a very strong commitment from Australia that it would make sure that as they access that they would make it the pacific was also able to access it," she said. "I feel very confident about that."

But Dame Meg said on whether the vaccine would come from Australia or from a combination of other vaccines being developed around the world, she could not clarify.

She said at the UN Assembly in December, the Pacific leaders will emphasise they get their fair share of the vaccines.

"And this is not just through Australia and New Zealand, if there are opportunities for the vaccines from elsewhere that have been cleared, there are some Pacific island states working with different groupings to ensure that those vaccines will be available."

The Tuvalu Foreign Minister said there was this perception that the Pacific was the least affected by the pandemic in terms of infections.

But Simon Kofe said this should not affect the support to the region "because although health-wise we are not getting the virus, it has an impact on the economy particularly those countries that rely heavily on tourism.

"They require testing facilities, the health equipment to be able to allow the movement of people." Kofe said. "And the same would apply to the vaccines.

"I hope that we are not looked upon as not really needing it.

"It's something that is a need for our economies and the well-being of the people of the Pacific. 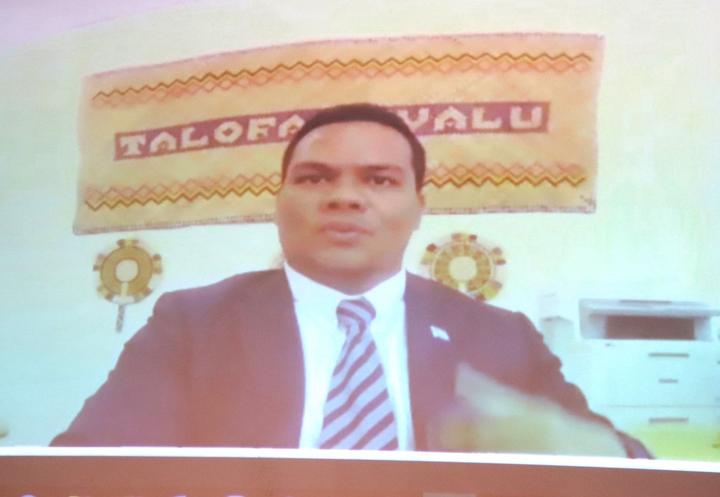 Dame Meg said while there was an emphasis on the vaccines, the focus should also be on economic recovery in the Pacific.

She said this was a big part of where the Pacific is right now.

Dame Meg said the economic ministers, when they met earlier this year, had proposed the establishment of an economic recovery taskforce.

"And that has been established and we are trying to get that off the ground to try and look at what are the different opportunities that we can particularly using the digital economy," she said.

"But with that of course, we're up against the high cost of transport to get products to the market.

"In terms of shipping, there is a lot of activity going on from some of our islands still shipping primary produce to countries like Australia and New Zealand."

Kofe said Australia and New Zealand are important development partners for the Pacific.

But he said there were other areas that needed cooperation with the two countries.

"The vulnerable state of our health systems in the Pacific - if some of these countries were to have cases of Covid 19, the impacts would be devastating on the people socially and economically.

"But there are other related mattes as well besides the health sector: one area for Tuvalu is connectivity during Covid-19.

"There's a renewed focus on improving our infrastructure and internet connectivity, delivery of our service to some of the remote places.

"In some countries in the Pacific we're still under a state of emergency and there was a period where schools were closed for some time."

This had placed more pressure on other services like the internet, Kofe said.

He hoped support and cooperation from New Zealand and Australia would continue in these areas.

Kofe said there was a renewed focus on what the international engagement on the Pacific's priorities would look like post-pandemic.

He said consultations, coherence and listening to member states' common concerns and ideas was key to regionalism.

"As part of a need to invigorate regional commitment towards gender equality, ministers have recommended a proposal for an annual meeting of Pacific women leaders.

"This meeting would involve women leaders of heads of governments, ministerial level, heads of ministries and departments."