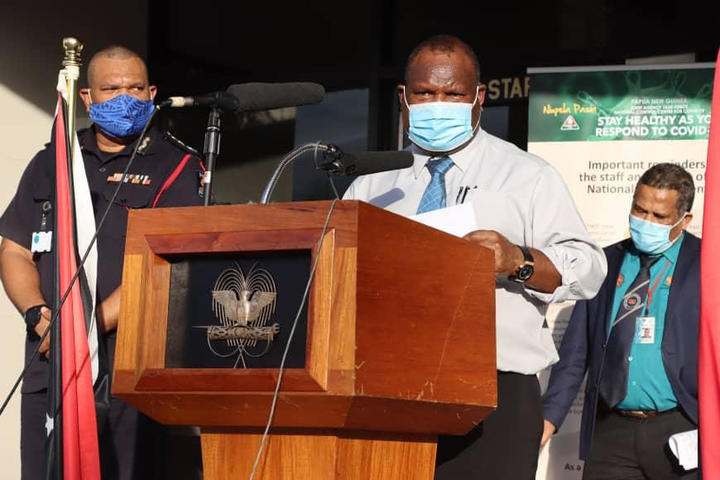 Five new cases were confirmed yesterday and the commissioner, David Manning, said they were all in the National Capital District (NCD).

Mr Manning said contact tracing efforts are being attempted in the city which went into lockdown on Monday.

Port Moresby and the NCD are initially to be shut down for 14 days with a curfew between 10pm and 5am. All schools and non-essential businesses are closed.

Commissioner Manning told a media briefing on Thursday evening that confirmed cases had reached 72, with 54 known active cases. There are three critical cases, all in Pt Moresby hospitals, including one on a ventilator.

He said the death toll remained at two.

"New cases today, case numbers 67 to 72 are all based in NCD. And from the case studies, or histories, what it tells us in the national control centre is that it is very much widespread in the city."

While the capital remains the focal point of PNG's surge of confirmed covid cases in recent days, a new case was reported in Lae this week

Commissioner Manning said while the positive case in Lae was now stable and in isolation, contact tracing efforts had swung into action in the Morobe capital.

"Seventy-four staff through contact-tracing were identified and are quarantined from the provincial immunisation training which they were all involved in. This includes staff from the WHO (World Health Organisation), World Vision, NDOH (National Department of Health) and the Morobe provincial health authority."

The commissioner also noted they were cognisant of the spread in neighbouring Indonesia where the two Papua provinces had confirmed cases numbering over 3400. He said this included 42 new cases in last 24 hours and a total of 37 deaths.

Paison Dakulala said he is hoping medical teams being dispatched from Australia will be able to help ramp up efforts.

Dr Dakulala said the number of people authorities need to reach who have come in contact with infected people is already in the thousands.

"So it is not easy to get contact tracing because those people who test positive have been in contact with people and especially those who move around make it very difficult for us," he noted.

"And so we are behind the eight ball in contact tracing and we are stepping up in increasing the numbers of people who can do that."