The Melanesian Spearhead Group (MSG) has signed a Memorandum of Understanding with Oceania Football (OFC), with the goal of promoting and developing football and futsal in the region.

The signing ceremony was held in Vanuatu, with MSG Secretariat Acting Director General George Hoa'au and OFC President Lambert Maltock signing off on plans to establish a mutually cooperative relationship between the two organisations.

"I started this discussion even before I became President of the OFC but I was determined to see it come to fruition during my four-year term," Maltock said. 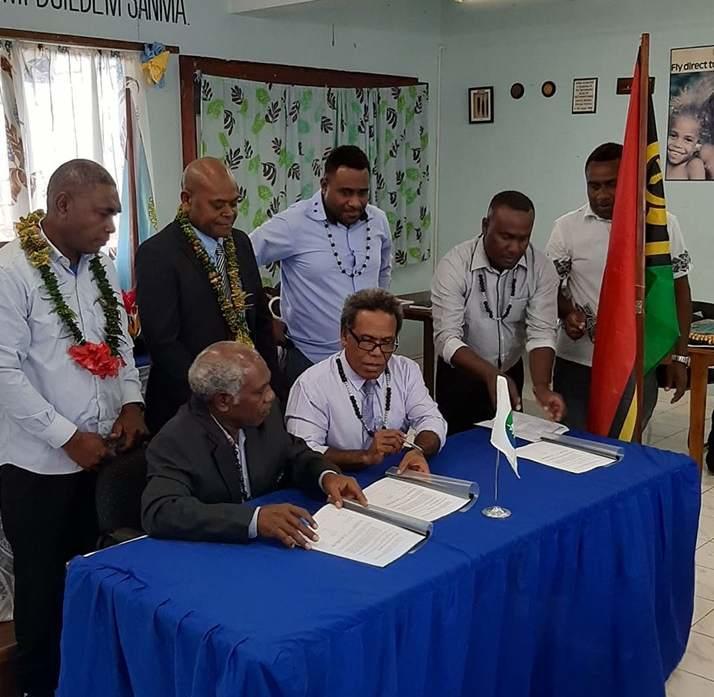 "I am proud that the MSG Secretariat has taken a strong move to ensure our football is elevated to another level and our agenda behind this MoU is to ensure that two MSG member countries or one must qualify to take part in the 2026 FIFA World Cup."

George Hoa'au said the sports programme was not a new one at the Secretariat but it would be realigned to a stand-alone programme with a new officer, while there was the opportunity for further expansion in the future.

Last September, the inaugural meeting of Melanesian Spearhead Group Sports Ministers was held in Port Vila, which endorsed the revival of the Melanesian Football Cup and renamed it the MSG Prime Ministers Cup.

Mr Hoa'au confirmed that negotiations around future tournaments would begin when borders have reopened following the coronavirus pandemic.

"We will start the dialogue with the proposed host on a way forward and a date to be confirmed for the revival of the tournament, however at this stage we are yet to follow suit with the advice given from OFC."

The Secretariat will now prepare a programme for the MSG Prime Ministers Cup and the Melanesian Games in consultation with OFC, which will be hosted by Vanuatu, New Caledonia, Fiji, Papua New Guinea and the Solomon Islands on a rotational basis.

The MOU's objectives also include a long-term legacy plan including a forum to help train and develop coaches and match officials in the region.

Meanwhile, the respective national federations also proposed that the MSG Secretariat take the lead in dialogue with world governing body FIFA through the Oceania Football Confederation.