The Papua New Guinea rugby league community is mourning the passing of long-time administrator Don Fox, who helped to unite the sport following years of infighting.

The 78 year-old was born in Australia but became involved in rugby league after moving to PNG in 1966, when he joined the Magani Badili Rugby League club in Port Moresby as a goal kicking front rower. 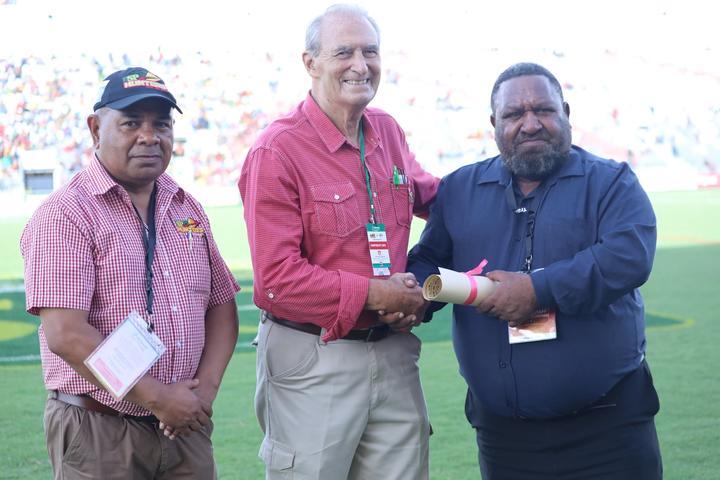 PNGRFL Chairman Sandis Tsaka said the governing body was notified of Don's passing on Monday by his wife Janet Fox.

"It is a very sad day for me personally and for rugby league in PNG," he said.

"His contribution to rugby league has been immense. Don has been a mentor to a many of us and we will sadly miss his wise counsel and presence as it was always special to be in his company whenever we had the opportunity."

In a post on Facebook, the former Sports Minister Justin Tkatchenko said rugby league had been plagued by infighting and court battles before Fox was appointed as Chairman of the PNGRFL.

He said Fox was a true gentleman who "saved rugby league from disaster" and helped get the sport back on track.

On May 13, 2019 Don was awarded Life Membership of the PNGRFL in Port Moresby.

Don Fox was made a life member of PNG Rugby League in May last year for his services to the sport as a player and administrator and also represented Port Moresby and Papua New Guinea in cricket.

"On behalf of his colleagues on the PNGRFL Board, CEO Reatau Rau and officials and players across the six tiers of the PNGRFL, valued partners and all our extended rugby league families in PNG and abroad, I extend our deepest and sincere condolences to Mrs. Janet Fox, daughters Joanne, Simone and Monique, their families and six beautiful grand children on the loss of your husband, dad, bubu and 'Our Don' Mr. Donal Leslie Fox OBE," Tsaka said.

"May he rest in eternal peace."

Details of funeral arrangements and other information will be announced after consultation with the Fox family.