A report on the Vanuatu elections in March by observers from the Melanesian Spearhead Group has found there was a significant drop in voter turnout - compared to the 2016 snap poll.

The observers attributed this to the challenges posed by the Covid-19 pandemic and extreme weather conditions during the time of polling. 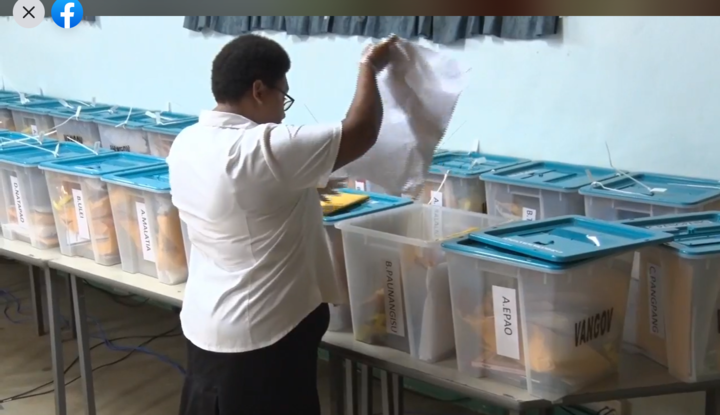 Collecting a new box of envelopes from the back of the hall. All the action was livestreamed for the people of Vanuatu, and the world. Photo: VBTC

Mr Hoa'au said the observers recorded an average of 51 percent in voter turnout.

The group also found that the outcome of this year's election was "embraced by ni-Vanuatu and that the atmosphere was calm and peaceful".

They also observed that polling stations visited were "managed by committed polling officials performing their duties even in challenging circumstances".

"There was also the overwhelming presence of political party agents and security personnel which allowed for appropriate scrutiny," the report said.

It also found that while there were challenges faced by the Vanuatu Electoral Office, the 2020 Vanuatu National General Elections was successfully conducted and the manner in which the elections were conducted.

Mr Hoa'au said he hoped Vanuatu will implement the recommendations highlighted in the report to "help guide them in future elections".

A report on the mission has been handed over to the Vanuatu government.

A senior official at the Vanuatu Ministry of Foreign Affairs, Joe Pakoa, said the government assured the MSG Secretariat that the report and its recommendations would be "put to good use".