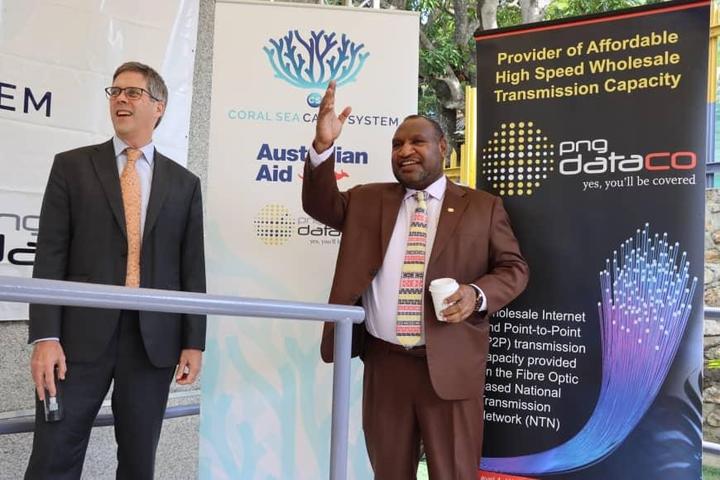 Co-funded by Australia, the cable project was launched on Friday, following the recent connection of the 4700-kilometre cable from Port Moresby and the Solomon Islands capital Honiara to Sydney.

Mr Marape said in a world that was digitalised, where commerce, trade, education and health were operated through the influence or assistance of the internet, the Coral Sea Cable would modernise PNG.

He thanked the Australian taxpayer for co-funding the project with PNG and Solomon Islands to the tune of $US135-million.

The prime minister also thanked his predecessor Peter O'Neill for his government's work to instigate the project.

Meanwhile Mr O'Neill questioned the Marape government's commitment to fulfilling the objective of the project: to deliver cheaper high-speed Internet around the country.

The MP said he was concerned that due to a lack of commitment from the current government, the high price of data for consumers in PNG had still not come

down and domestic connections to the gateway continued to fail.

"Right now the Coral Sea Cable should be making business easier, and very importantly, it should be being used by families and schools not only in Port Moresby, but being expanded around the country," Mr O'Neill said in a statement.

"The price paid for Internet access by our people and businesses should have fallen from day one of the Coral Sea Cable connecting Papua New Guinea.

"But, after a year of no planning or advancement of infrastructure from the landing point to the network, there has been no further investment from the government."

However, Mr Marape said that the cable project had resulted in reduced internet costs for at the wholesale level in PNG.

"PNG Dataco had reduced wholesale internet pricing in January 2020 by about 40 percent to US$98 or 340 PNG kina per Mbps per month, and will continue to reduce its wholesale prices as the usage volumes increase at the back of bringing into use such infrastructure."

"All these pricing is now being worked at together with NICTA (The National Information and Communications Technology Authority) and the retail operators like Digicel, Telikom and Bemobile so that prices are uniform and cheap throughout the country regardless of where you are located."