Manu Samoa's Census Johnston has packed a lot into his rugby life and last week, on his 39th birthday, he decided to call it a day.

The Auckland-born front rower, who has called France home for the past 11 years, admits it's a decision that had been in the pipeline for a few years.

"I've just been fortunate enough to pick up a few contracts still and get offers so I've decided to guts it out and take them and probably knew I was going to finish up a few months back."

"I had the chance to keep on playing another season but I kind of decided against it because training were getting a bit difficult and I had other stuff outside of rugby that I wanted to get on to," he said.

"Having this time at home with the kids during the Covid-19 it actually worked out and played things out on its own so it's the best time for me."

"I've been lucky enough to play until 39 so not many people get to do it and I'm just grateful that I've been able to play in some good teams and win a few things the last few years as well." 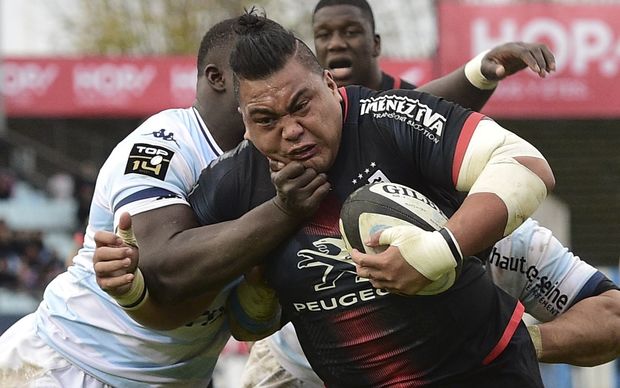 Having failed to crack the Auckland provincial team upon leaving secondary school, Johnston played a season of rugby league after being recruited by future Warriors and Kiwis coach Brian McLennan.

He won a national title with the Mount Albert Lions in 2004 and was being lined up for trials with clubs in Australia but the lure of a return to the 15-a-side game proved too strong to resist.

"At the time I thought that I had invested a lot of my time into rugby [so] it was kind of difficult to not stick with it and I'm pretty glad I did."

"I was able to stick through it and play with Taranaki and then play for Samoa [before] taking on a short-term contract with Biarritz which kind of changed my life and just opened up doors for me," he said.

Johnston made his test debut for Samoa 15 years ago next month in a crushing 74-7 defeat by Australia in Sydney. Six weeks later he was a part of his first test win against Tonga in Nuku'alofa.

In all he played 60 test matches, including 57 for Samoa and three for the Pacific Islanders. Only Brian Lima, To'o Vaega and Semo Sititi have worn the blue jersey more often.

Flashback to when Census Johnston casually grubbered through into space to create a try for David Lemi vs France 2012. This was the same month Samoa partly thanks to a big performance from Johnston at scrum also upset Wales to reach a top 8 world ranking for the first time. pic.twitter.com/3n2ltRpHRo

He played in three Rugby World Cups as well as wins over Wales, Scotland, Italy and Australia but the New Zealand-born prop said one test match stands out above the rest.

"That All Blacks game was probably one of the main ones and only being on holiday the week before because I had announced my retirement. We were on the other island, in Savai'i, holidaying with my family and then getting a call that two tight-head props had gone down and they needed someone to help out."

"I was lucky enough to still be training at the time and then hopped on a ferry at about five o'clock in the morning to Apia and training with the boys for a week and playing the ABs and seeing the people at that time and having the parades a couple of days before it just really gave me the feeling of gratitude to know that I was part of that huge event in Samoa." 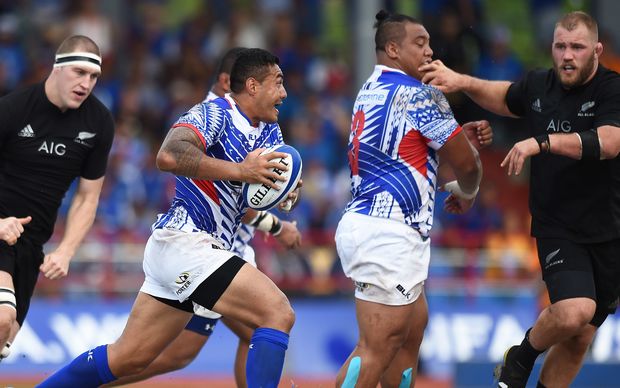 Census Johnston playing against the All Blacks in Apia. Photo: PHOTOSPORT

Having back-flipped on his international retirement, Johnston continued to play for his country until 2017, including a handful of tests alongside his younger brother James Johnston - who also plays in France - before a fitting sign-off against the All Blacks, once again, in his home-town of Auckland.

The three-time French Top 14 winner says the club versus country battle is a constant for Pacific Island players who are forced to weigh up financial security for them and their families with the pride and passion they have for their country.

"It's the difference between not feeding your family and feeding them but I knew that I was going to be able to pick something up again afterwards - I had spoken to my agent and he knew I was going to get something else - so I said to my president, 'look if you want I will leave my contract and I will give the contract back and I will find another club but there's no way I'm not going to the World Cup to play for my country and represent my family."

"It's one of the biggest things you could do in your career and it was a sacrifice I was willing to make at the time and I think a lot of the boys over the years have made those sacrifices as well." 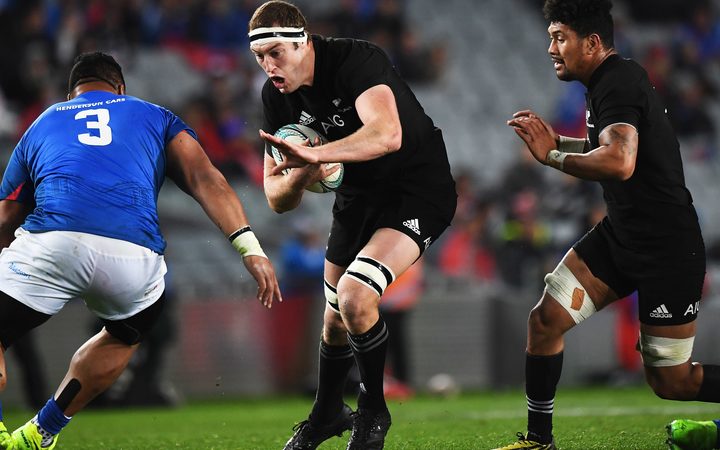 Johnston said an increase in the number of local players required on the field in France will limit opportunities for Pacific players who are also having to deal with the implications of Covid-19 on their livelihoods.

But he said it's no different in England or even New Zealand, which limits the number of Pacific Island internationals able to play in local Super Rugby teams.

"It would be nice for New Zealand Rugby to help out Pacific rugby but I honestly don't really see them helping out either because the New Zealand brand of rugby don't really have much connection other than having Samoans and Fijians playing in [their competitions]."

He said the re-election of Sir Bill Beaumont as the Chair of World Rugby doesn't give him much optimism that the fate of Pacific Island nations and its players will improve any time soon.

"You've got those Pacific nations [Fiji and Samoa] voting for a person who isn't really looking to change things and it was probably the best chance to have a guy like Agustin Pichot take over the reins and having someone a bit younger and hoping for that change but we're going to have another four years of basically the same thing and it is concerning to know that we still support that sort of system where you're trying to fight for change and help the Pacific Islands rugby progress but you take ten steps forward and 100 steps back by doing that." 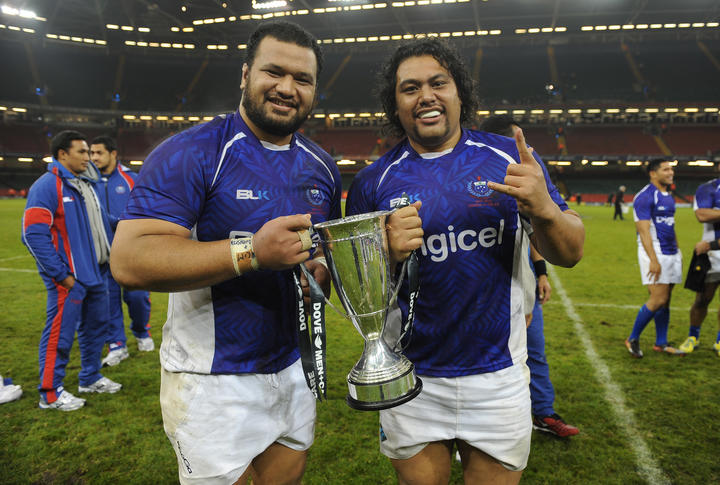 Now, after more than three decades chasing a ball around a paddock, Census Johnston is hanging up his boots and thinking about his next chapter.

The Top 14 season in France was cancelled earlier this month, bringing a premature end to a professional career that began in Taranaki 15 years ago and ended in Bayonne on the final day of February, with 13 minutes off the bench in a win against a Toulouse side he represented for eight seasons.

Former Manu Samoa teammate Kahn Fotuali'i also called time on his rugby career after the Top 14 cancellation was confirmed, hanging up his boots two weeks before his 38th birthday.

Johnston said he's been planning his post-rugby career for a long time and is excited by what's ahead.

"It kind of started at the beginning of my career, hearing a lot of the first lot of guys who started that professional era and they finished up and had a few issues [with] life after rugby so I tried to make sure that I was well prepared as much as I could. So we invested in a few things."

"When I first came over I invested into property in Auckland - we invested heavily in the last ten years and just sat on a lot of it and...the Auckland market has just blown up the last few years so I've been lucky enough to have that."

And home is calling. Family too. The 39 year-old's mum has been telling him it's time to come back to Auckland.

Johnston said he plans to finish out the year in France before making the long trek back with his wife and three daughters to where it all started.

"We want to try and get my oldest daughter back to school in Auckland before she starts high school so that's in over a years time but then obviously spend a bit of time in Samoa before we head back to New Zealand, so that's our plan at the moment."

"My parents made huge sacrifice to leave Samoa and come to a country where they didn't speak English so for me it's one of those things where you think about the struggles your parents would have been through to speak a foreign language but have a few years down the line to really be able to speak English."

"It kind of reminds me of my journey here in Europe, being in France and having to start from scratch and learn how to speak French and I can understand their struggles over the years and it makes me appreciate everything that they've planted for me over the years."

"It's so important to keep your roots and understand where you really come from because you can really get lost in a place like France and forget those things so I've tried to keep those things."

"Hopefully one day when we return back, we want to try and return back to Samoa to give my kids that sort of experience and get them to understand our culture and the things that my parents went through, and give them that sense of culture and the gratefulness that they should have for what our parents and our ancestors did to get us to where we're at now," Census Johnston said.