From dawn to well beyond dusk, seven days a week, Lina Chang and her team are plying the streets of Apia and beyond in a van laden with food parcels.

From an unusually quiet downtown, to villages in the bush-clad hills and along the palm-fringed coast, Ms Chang has been handing out packages and offering support to families who told her they never thought they would need it.

"We wanted to go out there and make sure that the families are okay," said Ms Chang. "It's not easy, because I can say now that they're not okay. But we have to do it." 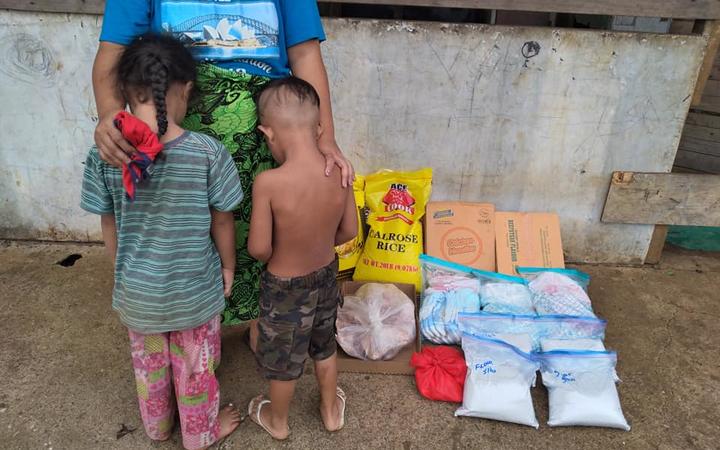 Her organisation, Samoa Victim Support, is on the front line of a crisis that unfolded as the tourism industry, the mainstay of the Samoan economy, crumpled in the face of the coronavirus pandemic.

In a few weeks, more than 70 hotels and resorts have closed, leaving more than 1,000 people jobless. In Samoa, like all Pacific countries, most of these workers are part of the informal sector, with little job security or safety net when the rug is pulled from under them.

Now, the International Labour Organisation says the impact of the pandemic could see tens of thousands of people across the Pacific plunged into poverty. 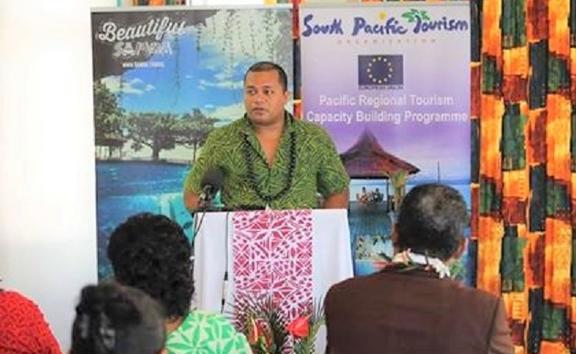 "For the Pacific this is much worse than the 2008 financial crisis," said Martin Karimli, the Pacific regional director for the ILO. "The pandemic, the crisis is wiping out half to three quarters of the countries' total exports."

The countries of the South Pacific are particularly vulnerable to the collapse in global travel. The industry accounts for 47 percent of all exports in Tonga, 52 percent in Samoa, 58 percent in Fiji, and a massive 70 percent in Vanuatu, according to data supplied by the ILO.

In Samoa, more than 12 percent of the country's workforce is employed in either hotels or resorts.

"Tourism is the mainstay of the country," said Fa'amatuainu Lenata'i Suifua, the chief executive of the Samoa Tourism Authority.

Until recently, Samoa tourism had been going gangbusters. It had seen growth year on year, the number of people visiting from Australia and the United States had reached record levels, development plans were being developed across the country, and marketing campaigns were about to be rolled out for the first time in Asia, Fa'amatuainu said.

For the Return to Paradise Resort, 2019 was a record year. The resort at Lefaga, one of the few owned by Samoans, had just won a supreme award, it had hosted the Chinese vice-premier, as well as several weddings. Things were looking good for this year too, said a resort spokesperson, Melanie Toialoa.

But the pain for Samoa's tourism industry started in November, when a measles outbreak spread across the country, forcing a weeks-long shutdown and state of emergency. That epidemic, which came from New Zealand, infected thousands of people and killed 83, most of them children. 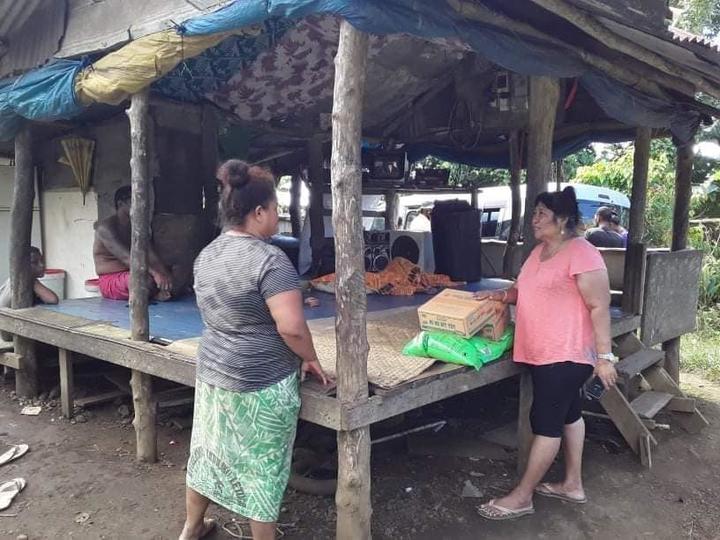 That measles outbreak had already caused a contraction in the industry, said Fa'amatuainu, with the first quarter of this year down 32 percent on the year before.

But then Covid-19 cut a path across Asia, Europe and America.

Samoa, where the pain of the measles is still fresh, and where the lingering trauma of the 1918 influenza pandemic, which wiped out a fifth of the population in weeks, acted quickly to close the border and impose stringent lockdown measures.

For nearly two months, schools were closed, church services cancelled, gatherings of more than a few people were banned, stores were shut, and a new airport terminal sat empty and unused.

Ms Toialoa said in an email that while she supported the shutdown to keep Covid-19 out of Samoa, it had come at significant cost to her resort and the villages it sustained.

"Easter weekend kicks off our 'high season' normally right through to September/October - so we would normally be looking at around 70-80 percent occupancy," she wrote. "But the reality is we are at zero percent- we have no guests."

Ms Toialoa said the resort had 125 staff from the surrounding area, and 100 had been laid off. The 25 who remained were on reduced hours and roles. With local lockdowns easing in the past couple of weeks, she said the resort was trying to entice local celebrations and weddings, but that market paled in comparison to the money brought in by overseas visitors. 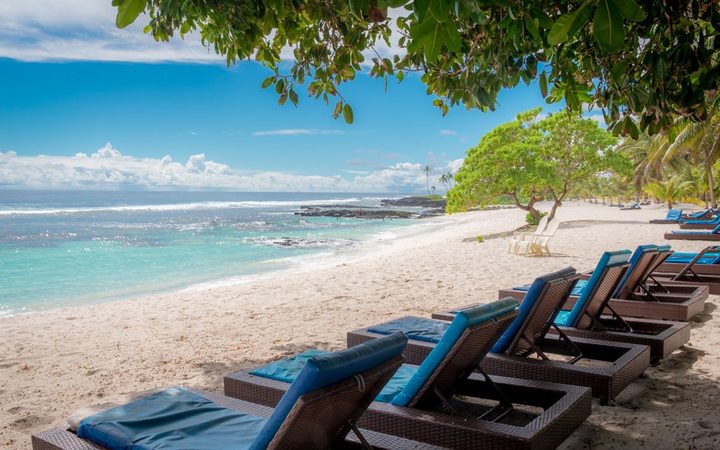 It is a scene playing out across the Pacific, and the ILO's Martin Karimli said thousands of families are being acutely affected. While accurate data and assessments were still being done, he said forecasts were grim.

"I think one of the good indicators could be how it would affect the poverty level and I think we can see and expect there would be millions of people falling back into poverty," he said.

One forecast released by the ILO this week suggested that relative poverty in Asia and the Pacific had increased from 22 to 36 percent in the first month of the crisis.

Ms Toialoa conceded that her resort was the only source of income for many families, and while many had returned to villages to live off the land, they still had expenses like power, phones and medicines. She said the resort was providing food parcels to affected staff.

Since a measles epidemic in November, the streets of Samoa's capital, Apia, have been quiet with two prolonged lockdowns: one for measles, and now the coronavirus. Photo: RNZ / Alex Perrottet

But in many other places, it's people like Lina Chang, from the Samoa Victim Support Group, who had been left to help the most vulnerable.

It has been a tough seven months for Ms Chang. Her charity, which depends almost entirely on donations, was on the frontlines of the measles epidemic, visiting traumatised families who had lost their children, offering food and counselling services.

Weeks later, she finds herself back on the road from morning until well into the night. Families have lost entire incomes, she said. Some villages had put their entire lot in with tourism, and now they are struggling. Other villages had had their populations surge, as laid off family members and their children return.

"Everybody's quite scared," she said. "Our people are not doing well. Losing jobs and they're scared as well. What will tomorrow bring? It's so hard."

In between village and family visits, she is back at Victim Support's Apia office mediating families or helping women who have fled domestic violence. Ms Chang said there had been a noticeable increase in violence since the measles epidemic, and that spiked again when the lockdown started. 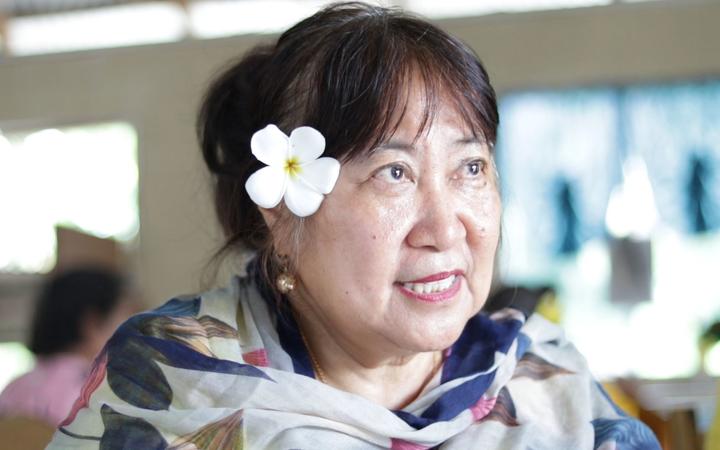 The Samoa government has announced a range of stimulus measures, mostly aimed at businesses, while people are also able to dip into their superannuation fund for welfare payments. The World Bank, the Asian Development Bank and the International Monetary Fund have also announced support packages for several Pacific countries.

But Martin Karimli said he is worried about the lack of protections for informal workers, and more support is needed for those who will fall into poverty.

"Informal workers will experience greater challenges regaining their livelihoods. So it's important those measures are targeted," he said.

Fa'amatuainu Lenata'i Suifua, from the Samoa Tourism Authority, said talks are underway with the New Zealand government about possible assistance, including putting people with no work on training courses, and the possibility of being included in any so-called tourism bubble, but they could be some time away.

Until then, it's people like Lina Chang who are dealing with a growing crisis.

"You can see that poverty is rising," she said. "How emotional it is, you just come back to the car and cry and cry and cry. But who is out there to help? It's been an emotional ride, and it's quite a lonely journey sometimes."

Ms Chang said she was worried that as spending tightened and businesses closed, the number of donations would drop. But she was determined to carry on.

"I'm well over 60. Here I am still continuing the work. I love our people, and just to have them see and feel that smile."