Pacific islanders living in the United States have an infection rate two to three times the average in at least four American states, according to data released Sunday by the Pacific Islander Center of Primary Care Excellence, a California-based group.

Many states don't separate data on Native Hawaiians and Pacific islanders. But in states where statistics are available, they show that the highest rates of infection are in Pacific island communities.

As of last week, California's state-wide average number of confirmed Covid-19 cases per 100,000 population was 62.

The rate for Pacific islanders living in California was 217, over three-fold higher. 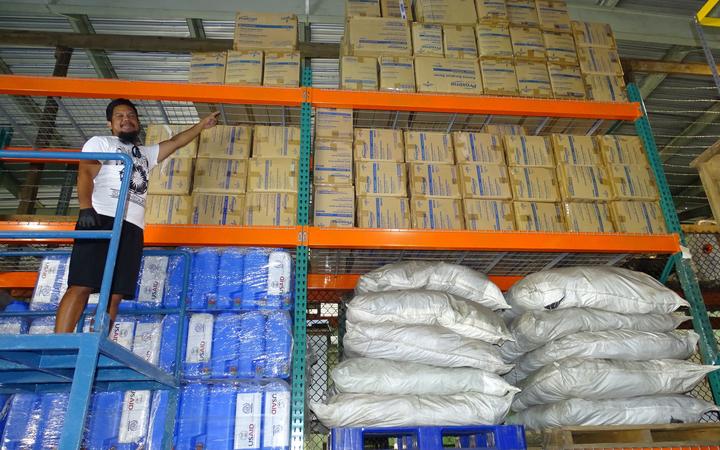 Marshall Islands Ministry of Health worker Mackneil Abraham points to boxes of recently arrived personal protection equipment being stored in anticipation of a future outbreak of Covid-19 in the country. Photo: Giff Johnson

Oregon statistics show Pacific islanders nearly triple the state average, while Salt Lake County in Utah - home to a large concentration of islanders where the headquarters of the Church of Jesus Christ of Latter Day Saints (also known as the Mormons) is located - is double the state Covid-19 average for 100,000 people.

Challenges for Pacific island communities to contain the spread of Covid-19 are cultural norms for social gatherings and large numbers of family members living in one home, making self-isolation nearly impossible.

On Friday, Hawaii media reported on a cluster of 32 confirmed cases of Covid-19 - about five percent of the state's entire confirmed cases - in the Kona area of Hawaii Island, with a number of these being Marshall Islanders who work at local McDonald's fast food restaurants and subsequently passed the illness to family members.

"This Marshallese community in the Kona area - basically were in living situations where they couldn't effectively isolate themselves," said Hawaii Health Director Bruce Anderson to state legislators last week, according to a report by the Hawaii Tribune-Herald.

"The challenges that Pacific Islander communities are facing with Covid-19 are the same challenges we have been dealing with for decades," said Melisa Laelan, the President and founder of the Arkansas Coalition of Marshallese.

"It is that of housing, food security, employment, and access to health care. The lack of these things makes our community vulnerable to Covid-19," she said.

"This pandemic magnified many of the gaps that have been overlooked for a long time. Things are bad and it will get worse if we don't aggressively work on these structural issues."

An estimated 10,000 Marshall Islanders live in Northwest Arkansas, many of them working in poultry packing plants in the area.

Both the Marshall Islands and Federated States of Micronesia have banned inbound travel for many weeks in an effort to prevent the introduction of Covid-19.

They remain two of a small number of nations globally that are yet to see a confirmed case of Covid.

Both western Pacific nations have large populations of islanders living in the United States, thanks to visa-free access to the US for islanders to live, work and study.

"All along, it has been our prime focus to exert every effort to maximize defense at our front gates - for Majuro and Ebeye," he said.

The ease with which Covid-19 is spreading among Pacific islanders living in the US worries government officials in the Marshall Islands because they believe the illness would spread uncontrollably once there.

Although the Marshall Islands has begun receiving additional medical supplies and equipment to deal with a possible future outbreak of Covid-19, limitations of its health system and a shortage of healthcare workers mean it is "not ready" for Covid-19, said Health Secretary Jack Niedenthal.

He also pointed out that the Marshall Islands population check-marks nearly every high risk category associated with Covid-19: the population has high rates of diabetes, hypertension, tuberculosis and other chronic illnesses, as well as a high rate of tobacco usage.

Dr Raynald Samoa, an endocrinologist with the City of Hope National Medical Center in Los Angeles, is leading a team of Pacific islander researchers, healthcare providers, community leaders, and faith leaders in developing and implementing a plan of action to slow the spread and support those who are already affected, according to a statement released Sunday by the Pacific Islander Center of Primary Care Excellence.

"The national Pacific Islanders Covid-19 Response Team is working with representatives from regions with high Pacific islander populations to collect data, consolidate resources, and plan an infrastructure of response to anticipate and address the needs in the community," said the organization.

"The invisibility of a group so disproportionately affected by this pandemic requires a keen expertise in not only population infection disease control management but a proficient capacity to inform, engage and empower communities to work with city, county, state and federal agencies," said Dr Samoa.

"The Pacific has always known that one drop of water has very little effect but banded together those single drops of water form a vast ocean. We're going to need an ocean to turn the tide on this pandemic."