Preparations are underway in Fiji for the funeral of one of its chiefs.

The family said due to the Covid-19 restrictions currently imposed in the country, traditional protocols will not be accorded to Ratu Finau. 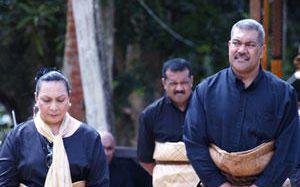 Ratu Finau Mara, right, with his cousin Tonga's Princess Pilolevu at his mother's funeral in Fiji in 2004. Photo: Supplied

In a funeral notice issued on Saturday, the Mara family said the safety, health and wellbeing of the people was important and there would be no traditional reguregu accorded to Ratu Finau.

The reguregu is a ceremony where family and friends gather to offer gifts to the bereaved family to help with the funeral expenses.

Ratu Finau will be laid to rest on Friday at the chiefly burial grounds at his mother's village of Lomanikoro in Rewa.

He is survived by his wife and two children.