Only the concrete foundation, water tanks and a few trees remain standing at Whitesands Beach Resort in Ha'utu, Tonga.

The Skelton family, who have owned the resort since 2006, have also been left homeless in the aftermath of the recent Tropical Cyclone Harold which hit at the worst possible time, during a king tide. 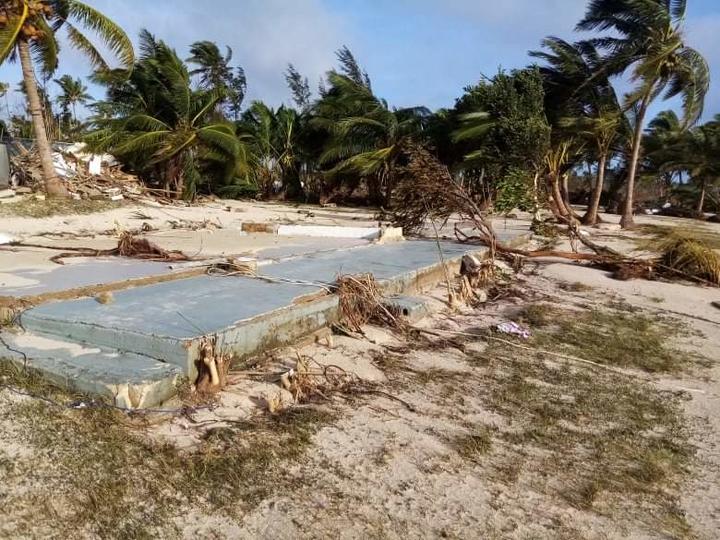 Only the concrete foundation of the resort remains post-Cyclone Harold Photo: Supplied

Tonga felt the brunt of Cyclone Harold on 9 April 2020 as the then category four storm, packing gusts of up to 260 km/hr, passed to the south of Nuku'alofa.

The chief executive of the National Emergency Management Office, Paula Ma'u said the biggest impact from the cyclone was the sea surge, which had been put at three metres.

Mr Ma'u said the impact of the surge on several resorts on the west of Tongatapu was huge with the repair bill likely to run into the millions.

The owner of the Whitesands Beach Resort, Gloria Skelton, said they prepared themselves for Cyclone Harold in the same way they had for past cyclones, like the category five Cyclone Gita in 2018.

"In terms of damage to the resort, Cyclone Gita was like a picnic compared to Harold. We didn't lose our building to Gita, just a lot of sand and water damage to furniture and the roof," Gloria Skelton said.

Ms Skelton said it was a terrifying experience for her family. At the height of the storm Ms Skelton and her fiancé could not find her daughter or her grandson, who were also on the resort property as the heavy waves hit. Ms Skelton said at the time she feared they may have drowned.

"My partner, Isaac, and I woke up to our wooden door being bashed in by rocks carried through by the waves and we watched the front of the resort collapse," Gloria Skelton said, "There was even decent sized fish coming through with the waves."

Ms Skelton said her partner Isaac managed to pull the louvers out of a small window at the back of the resort and bash through the wire mesh so they could both climb out, but he was seriously injured in the process.

She said they ran into a shipping container further back in the section. But Isaac had a massive open gash on his thigh and was bleeding excessively.

"We managed to find material inside the shipping container to cover his gash for the time being," Ms Skelton said.

"We sheltered inside the container until the storm passed and thankfully a few men came to our rescue and took us to the hospital." 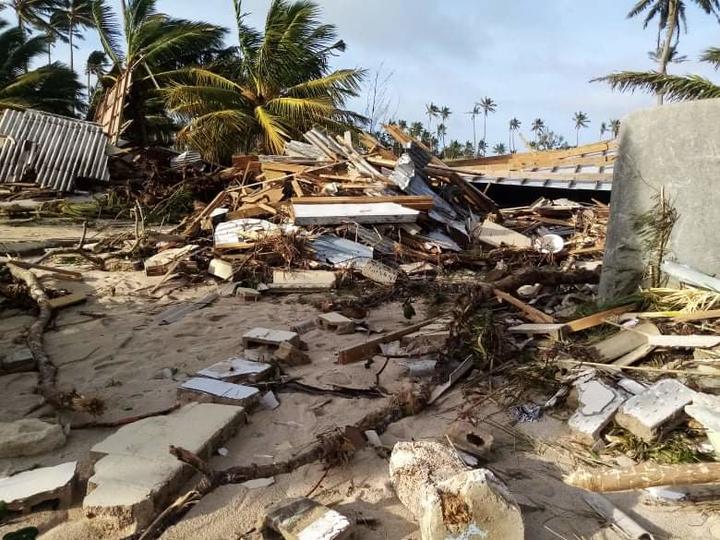 Meanwhile, Ms Skelton's daughter in New Zealand, Annaliese Skelton told RNZ Pacific that in a unit at the back of the resort, her sister and her son could see waves destroying the houses in the front and decided to run through the paddocks and up the hill.

"My sister and her son were with our dog and from the hill they watched the waves get bigger and heading to their direction. They all ran to the top of the road where they found rescuers who took them to safety," Annaliese Skelton said.

"At this point, my sister thought our mother had died," she said.

The only possession Ms Skelton managed to save through the whole ordeal was her iPad. While in hospital with Isaac, she received a message on it from her daughter and grandson saying they are safe. 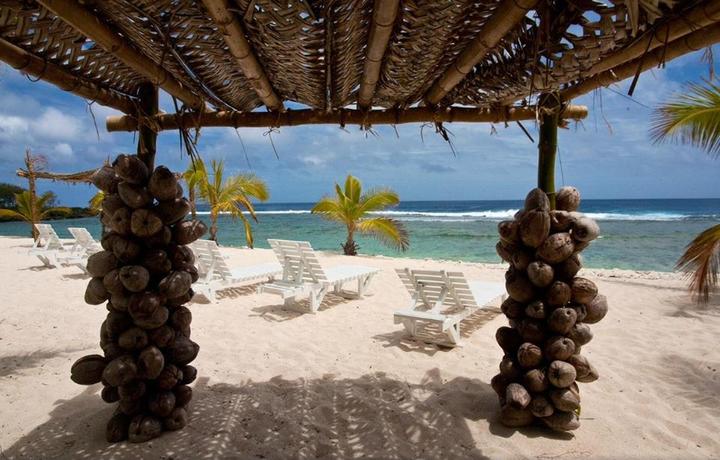 "We are all heartbroken! We as a family have poured sweat, blood and tears into building the resort up. There have been many memories made there not just for us, but people who have had vacations there or been married at the resort," said Gloria Skelton.

"It's horrible to see how quickly something so meaningful can be destroyed literally overnight."

But it gets worse.

"Not only were things destroyed, but we've had vandals and looters come by to take items that survived the cyclone for examples wheels off Isaac's car, which was smashed by the waves," Ms Skelton said.

"At the end of the day, my family are just grateful to have survived Cyclone Harold," she said.

Annaliese Skelton has set up a donation page for her family as they have lost their home, their livelihood and all their belongings.