Unaffected by the worldwide Covid-19 pandemic, copra makers in the Marshall Islands produced one of their biggest crops in history during the first quarter of 2020.

Ships delivered 2,447.60 tons of copra to the Tobolar Copra Processing Authority in Majuro from January through March, according to statistics provided by processing factory.

With the government subsidizing the 50-cent per pound price paid to copra makers, this tonnage translates into over $US2.4 million being paid to islanders living on mostly remote islands in this western Pacific nation. 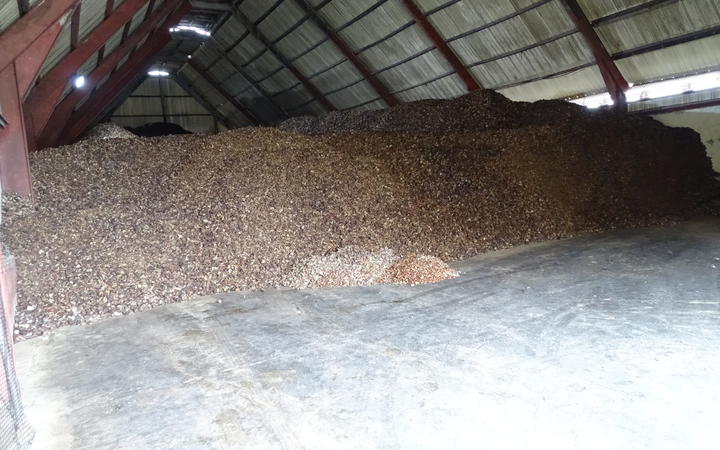 A warehouse at the Tobolar Copra Processing Authority in Majuro is filled with copra — dried coconut meat used for producing coconut oil — following a bumper crop brought in for milling during the first quarter of 2020. Photo: Eve Burns

The January-March period was one of the highest tonnage quarters ever, just short of the best quarter-ever in 2018 when 2,556.94 tons were delivered to Tobolar from October to December.

This 2020 copra tonnage also marked a big turnaround from late 2019 when the government imposed a travel ban to the outer islands to prevent the spread of dengue fever that curtailed pickup of copra, which is the main economic activity for most outer islands.

Only 1,000 tons was brought in between October and December last year because of restrictions due to dengue fever.

If ships can keep moving to outer islands and the government can keep its big subsidy in place to keep paying copra makers 50 cents per pound, 2020 could end up being a bumper year.

While Ailinglaplap Atoll has been playing second fiddle to Arno Atoll in copra production the past couple of years, this past three months the central atoll jumped out in the lead.

Ailinglaplap's high production was based on it having ship visits each month during the January to March period.

A number of islands saw only one - or no - ship visit during this period.