Vanuatu's political leaders are taking stock of the damage from Cyclone Harold amid protracted negotiations over the formation of government.

With another fractured parliament emerging, formation of a government will require a coalition of at least four political parties.

The Graon Mo Jastis Pati led by Ralph Regenvanu won the most seats of any single party, nine of the 52 in parliament.

There's no guarantee about which leader will emerge as prime minister.

Mr Salwai said negotiations were ongoing, but that MPs-elect were mainly focussed on helping the country get through the twin crises of a major natural disaster and the covid-19 pandemic for which Vanuatu was already in emergency mode.

"Well it's something that we have to discuss with other parties to find a stable solution," he said regarding formation of a new government.

"There are many options underway, so I can't tell you yet which one will be at the top, as most of the elected members of the parliament are still on their islands due to the cyclone."

Other leaders who RNZ Pacific spoke to echoed Mr Salwai's comments. They wouldn't be drawn on which way their political allegiances may go, but emphasised the importance of everyone working together at a time of crisis.

Until now, disrupted telecommunication and transport links have made it difficult for the caretaker government to gauge the full extent of the damage from Harold.

Mr Salwai said a civillian reconnaissance flight over some of the islands affected by the cyclone showed extensive damage to roads, houses, schools, churches and health infrastructure. 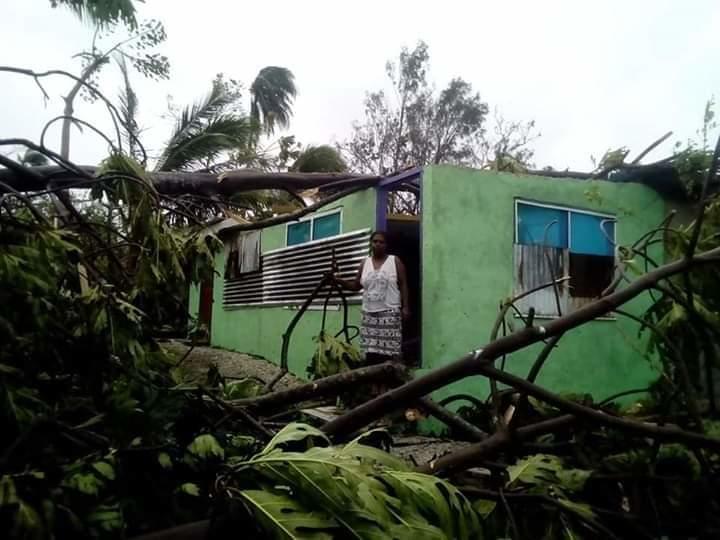 Cyclone Harold has destroyed buildings and trees across Santo and Pentecost Photo: VBTC

The caretaker prime minister was speaking from the capital Port Vila and waiting for bad weather to abate, and clearance from Vanuatu's aviation authorities, so that he could take a flight to his home island of Pentecost, one of those directly affected by the cyclone.

"As soon as it's granted (aviation clearance) I think it's one of the responsibilities of us who are newly elected to visit our constituencies, especiall those that have been badly affected."

Mr Salwai said France, Australia and New Zealand were among the countries who have offered to help. However post-cyclone damage asessment needs to take place first.

"Because we cannot do any assessment yet on what happened on the ground to see what kind of help they can provide," he explained.

"But definitely I'd say shelters (are needed) because many homes have been destroyed, and water. We have a problem with water and power in Luganville, and telecommunication was cut off in most of the islands."

Meanwhile, Vanuatu's National Disaster Committee urged the government to extend the State of Emergency implemented over covid-19, to enable authorities to respond to pressing needs needs of communities affected by Cyclone Harold.

Mr Salwai indicated the Council of Ministers would meet before the end of this week to consider the extension.

Parliament was due to convene within 10 days of the release of the final election results, or by Thursday next week.

Meanwhile a New Zealand Air Force plane has left for Vanuatu to help in the aftermath of the cyclone.

The foreign minister, Winston Peters, says a P3 Orion left this morning to carry out a surveillance flight.

$US300,000 had also been released to help with immediate relief.

A Hercules was also on standby with disaster relief, should it be requested.

Mr Peters said serious consideration was being given to ensure any response didn't spread Covid-19 to Vanuatu.