On Saturday, the government announced its highest recorded cases in a day, with five people confirmed to have the coronavirus.

The latest two cases involve the wife of a man from Labasa who had already tested positive and a family member of the country's first case. 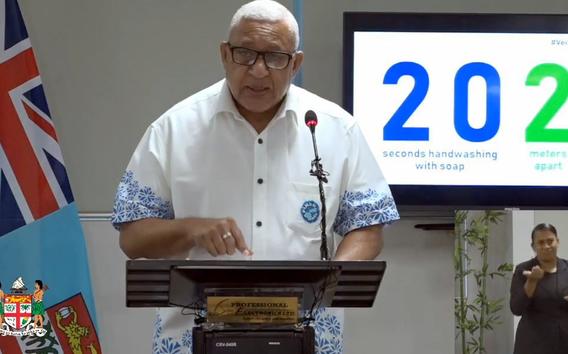 Prime Minister Frank Bainimarama confirmed she was sister of the flight attendant from Lautoka.

"This was a case we have long been expecting. She is the young mother of an existing case, the Covid-19 positive one-year old baby boy, and she chose to stay in isolation with her child to continue to breastfeed and care for him.

"She has been in isolation since 19 March, when our first case tested positive," he said.

Both patients were stable and isolated in hospital.

He said it was during this screening process that authorities discovered a man who was not only displaying a fever but also other symptoms and had a recent travel history which he had hid from officials.

"He arrived in Fiji on the 24 March from Uruguay, transiting through Singapore.

"Now, you might be wondering how this gentleman arrived in Lautoka when the lockdown came into effect on the 19 March. After further questioning, we discovered that he had in fact smuggled his way into the confined area. Once inside, it appears he remained within a set area in Lautoka. Now that he's showing symptoms, our contact tracing teams are determining how many Fijians he may have put at-risk," said Mr Bainimarama.

The man's Covid-19 test results are expected tomorrow but in the meantime contact tracing teams have determined the area where he stayed.

"So, we plan to lift the lockdown of the broader Lautoka confined area tomorrow at 5am. But, we will also be announcing a new confined area within Lautoka based on this gentleman's movements," the prime minister said.

These details will be announced tomorrow.