The only international airline to service the Marshall Islands has suspended flights for at least three weeks after an incident associated with their COVID-19 coronavirus restrictions.

United Airlines has taken the step after local authorities refused to accommodate passengers and crew inside the Majuro airport when a regular flight developed mechanical problems forcing it to halt its onward service to Honolulu.

When Wednesday night's "Island Hopper" service from Guam to Honolulu was forced to terminate in Majuro because of mechanical problems, government authorities refused United's request to accommodate the 124 passengers and crew members inside the departure lounge of the terminal because the government placed a ban on incoming air arrivals since March 8 to prevent spread of the COVID-19 coronavirus. 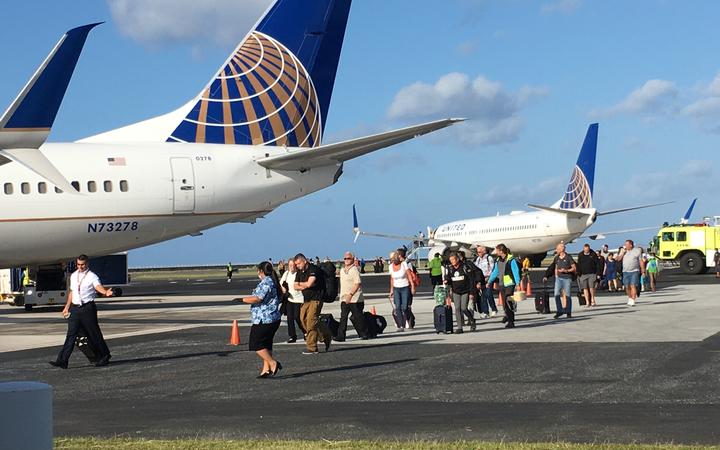 Passengers and crew leave a grounded United Airlines plane (right) after sleeping on the plane to board a "rescue" flight on 19 March Photo: RNZ Pacific / Giff Johnson

The Marshall Islands is among a dwindling number of countries that have no confirmed cases of Covid-19 despite the rapidly spreading global pandemic.

Dan Weiss, United's managing director for Global Government and Regulatory Affairs, informed Marshall Islands authorities by email that a "makeup" flight Friday would be the last scheduled air service until a roundtrip flight 13-14 April connecting Majuro and Kwajalein in the Marshall Islands with the outside world.

No other flights are currently scheduled in April.

United is the only international air carrier servicing the western Pacific nation.

The suspension of service to the Marshall Islands will also impact Kosrae in the Federated States of Micronesia, leaving that island without air service until 13 April.

"The recent incident with the United Airlines was very unfortunate for all concerned given the state of emergency we are confronting in our effort to prevent spreading of Covid-19 virus," said Foreign Minister Casten Nemra.

Earlier in the day of the grounding of United's Boeing 737 in Majuro, the airline had publicly announced it was reducing the four weekly roundtrip Island Hopper flights to one roundtrip per week starting 23 March because of the "significant impact" the coronavirus is having on the airline industry.

After the flight was grounded in Majuro on Wednesday night, passengers were required to stay on the tarmac within the vicinity of the airplane, and slept on board before a rescue flight arrived on Thursday morning to transport them to Honolulu.

Mr Weiss, in a 19 March email to Marshall Islands Health Secretary Jack Niedenthal, said the airline had "respectfully sought assistance" from the government to deplane the passengers to avoid staying on the plane for many hours, but was denied.

"United has the upmost concern for community health, and we do not aim to cause the Marshall Islands government additional worry," he said.

"It has become apparent that our services present too much risk for the Marshall Islands government and our policy and procedures which must accommodate unforeseen mechanical challenges do not fit within the Marshall Islands' coronavirus mitigation plans."

Mr Weiss said it was unacceptable to the airline that its passengers and crew were "not being provided airport shelter during an irregular event."

"The Marshall Islands should not be punished for trying to protect its population, and passengers boarding a plane during a worldwide pandemic (should) understand that it is no longer 'business as usual,'" Mr Niedenthal replied, requesting United to reinstate the once-a-week service as previously announced.