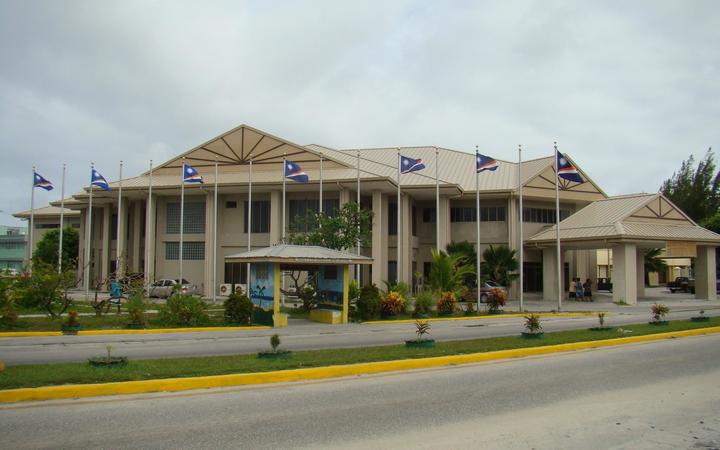 Marshall Islands flags fly in front of the capital building in Majuro. An audit of the government's passport office has found numerous problems and "ineffective" management. Photo: Giff Johnson

The report is the result of a two-year investigation into the government's passport programme for the 2015-2017 period. It was issued by the Marshall Islands Auditor General as part of the 72nd Semi-Annual Report to Nitijela or Parliament last week.

The audit found 573 passports issued to non-indigenous Marshallese did not have records showing their citizenship is legal.

"Multiple instances where passports (for naturalised and registered citizens) were processed without the required documentation at the instruction of those higher up in the organization", and a group of family members who received passports through the Marshall Islands passport investment programme even though their check payment bounced for lack of sufficient funds - leading the auditor to "question the legitimacy of those passports due to lack of payments".

Marshall Islands Attorney General Richard Hickson provided a six-page response to the audit, mostly agreeing with the many audit findings and outlining actions the office is taking to improve operations.

A key challenge the Attorney General's office aims to change is to increase the number of staff available for running the passport office and work out "a viable solution" to the current passport processing machine that, among other problems, has malfunctions that "often cause data or records to be deleted [or become] inaccessible," said Mr Hickson.

The Attorney General also said a new Ministry of Justice building to be funded by Japan will include "a stand-alone office for passports and secured storage facilities".

The audit identified many "internal control" problems for the 2015-2017 period. For example: There is no legislation governing the existence of the nation's Passport Division at the Attorney General's office. Blank passport books "were not stored in a secured area and are at risk of being stolen, replicated and worst, sold off illegally".

Passports were not issued in sequential manner which prevents effective monitoring of passport stocks and quick detection of missing passports.

"Passport records were not maintained properly, which affects management's ability to perform its function and there is a question about the integrity and accuracy of passport data."

The Passport Division lacked staff and resources to effectively carry out its duties.

"Our attempts to calculate the number of blank passports on hand and to determine whether passports were missing were unsuccessful because there are no records of passport purchased during the period from 2003 through 2007," the audit said.

The 573 passports issued to non-indigenous Marshallese did not have a corresponding Cabinet Minute or Court Decree or other documentation confirming that lawful citizenship had been granted under the legal process.

"In the absence of the pertinent records we could not determine the legitimacy of the 573 passports and whether they have met the Marshall Islands citizenship criteria."

A register or registers of persons who had become Marshall Islands citizens was not maintained over the years as required by the Citizenship Act of 1984.

There are no complete records of non-indigenous Marshallese who had obtained passports through a 1990s Passport Investment Scheme. The auditor said this lack of data delayed completion of the audit because auditors had to attempt piece together records.

The audit said there were "no proper checks and balances in processing passports." This was because, for example, "we found several instances where passport applications were processed without the required documents," said the audit.

"Accordingly, we determined that there is an internal control weakness because if the passport staff or director are not acting in good faith and proceed to process passports and forward to Attorney General for approval, the system will not detect it."

The audit said this also applied to the role of a Passport Panel established to review passport applications.

"In the current set up, officials that review and print passports are expected also to make the determination whether or not an application requires the attention of the Passport Panel for further screening and reviewing," the audit said.

"This presents a risk in the internal control structure because if an official is not acting in good faith and does not want certain passport applications to go through Passport Panel for scrutiny, he or she could unilaterally decide not to refer those for review by Passport Panel."

The audit provides numerous recommendations to improve operations of the Passport Division.

The Attorney General said the office "will push for more budget allocation in the upcoming budget hearing for next fiscal year" for additional staff and "much-needed resources to carry out its functions and duties."

He noted that when the Passport Division was transferred from Foreign Affairs to the AG's office, "it was given to this office without any staff and insufficient funding."

Most of the staff who handled passport processing had multiple other duties to carry out in the office, he said.

The role of the Passport Panel was being expanded. Originally, it was focused only on evaluating new passport applications.

"However, more attention is being paid to passport renewals, which were not intended for in the terms of reference of the Passport Panel," he said.

Mr Hickson also defended the current passport processing operation, but added that the issues pointed out by the audit emphasised the need of the division for a full-time staff with resources to manage the programme.