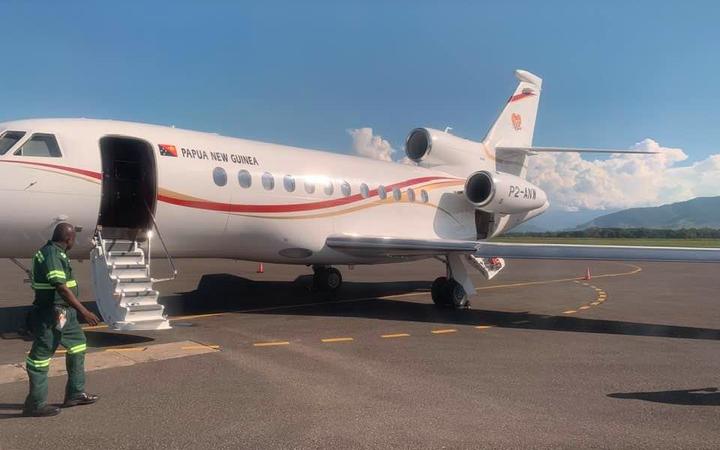 James Marape said he was handing the Falcon Jet, used over the years by successive governments, to national carrier Air Niugini.

Mr Marape said his predecessor Peter O'Neill racked up bills of over $US8.6 million owed to Air Niugini by using the Falcon.

Mr O'Neill disputes this claim, accusing the prime minister of a stunt.

His former government, upon coming to power in 2011, said it would sell the luxury item inherited from the previous government of Michael Somare.

Mr O'Neill said the plane was bought for close to $US50m, but when he tried to sell it the best offer received was only around $20m.

Therefore, he said, it was decided to transfer ownership of the Falcon to Air Niugini, with the airline owing government the value of the plane, while deducting costs as the administration chartered the jet.

Paul Barker from PNG's Institute of National Affairs said that as prime minister, Mr O'Neill was a frequent flyer.

"The previous prime minister was extensively using the aircraft. He took regular flights to East Asia, China, Singapore, Australia, regional meetings. All very useful, but someone has to foot the bill."

Only a few PNG airfields are able to accomodate the jet landing. Instead it has been often used for international travel. Mr Barker said the O'Neill government accumulated significant costs in parking fees at international airports.

"Instead of just flying out on the day or time scheduled, the then prime minister would stay on for another night in Hanoi, Jakarta or where ever it was and cause great difficulty to our ambassadors and high commissioners who would then be pressured to secure the finance to make sure that the plane was able to pay its parking fees and so on," he explained.

In a post on Facebook, Mr Marape said that since becoming prime minister last May he had only used the Falcon five times.

"I will stop now and take commercial flights unless it's urgent, then we will pay for use of it just like any normal plane hire," he said.

The prime minister said instructions had been issued for the jet to be sold earlier but "lack of response from potential buyers and Air Niugini's view to take it into their books as their asset" made this decision only possible now.

An executive jet with a small number of seats is of limited use for Air Niugini, and it remains to be seen what the airline will do with the Falcon.

"Practically the only way is really to try and offload into the business executive market, if one's trying to reduce the cost, and Air Niugini is certainly very eager to offload expensive assets," Mr Barker said.

"But whether they really have it on their asset register is another matter."