The body of a man has been found in Fiji after he went missing in a river during Tropical Cyclone Sarai. 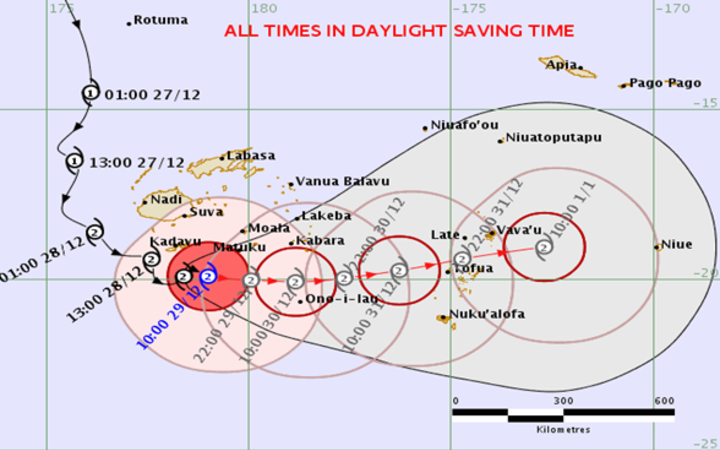 Two people have now died during the storm, after an 18-year-old drowned while swimming yesterday.

The Fijian Broadcasting Corporation reports the body of a man, in his late 40s, was recovered in Naivucini, north of Suva inland on the main island Viti Levu.

The FBC said villagers helped police search for the man, and it was believed he was swept away by strong currents when crossing a river yesterday.

Another person is in hospital after being hit by a falling tree.

Cyclone Sarai continues to bring storm force winds and rain to much of Fiji.

The cyclone has been affecting Fiji for the past 36 hours, bringing widespread flooding and some damage.

Disaster officials in Fiji say their focus is now on ensuring the people of the Southern Lau group are prepared for the slow moving storm.

The National Emergency Operations Centre said seventy evacuation centres around the country are in use with 2,538 people sheltering there.

It said it is working with the Ministry of Health on initial assessments for affected areas before the green light will be given for families to return home.

A number of roads are being monitored for flooding while one road at Kadavu is blocked by a lanslide.

The Centre also reported that Fiji Airways and Fiji Link have resumed most services from Sunday.

It could take upto a week to restore full power to Fiji's main island, Viti Levu.

Many people across parts of the Central, Western and Northern Divisions have been without power supply since Friday night.

Energy Fiji Limited (EFL) said in order to energise the entire EFL network in Viti Levu, they need to inspect the over 10,500 kilometres of power network and over 102,000 concrete and wooden poles which includes steel towers in Viti Levu.

The CEO of Energy Fiji Limited Hasmukh Patel has already said full restoration to all areas in Viti Levu could take up to one week.

Fiji Village reports Energy Fiji Limited said teams started inspections on Friday but it is was slowed down by the wind and rain.

These inspections are continuing today.

The priority areas at the moment are hospitals and health centres as well as water treatment plants.

He adds that power supply in Viti Levu was affected and this meant that every metre of the power line has to be physically inspected, repaired where required, before it can be energised.

He said while this process was time-consuming, it was none-the-less critical to ensure the safety and security of power supply.

Meanwhile, the Tonga Met Service is forecasting that winds will lift from this evening as the cyclone moves toward Tonga's Ha'apai and Vava'u group.

The storm's major impact on Tonga is forecast to occur from New Year's Eve.