Most Marshall Islanders living in their home islands say that job opportunities, education, medical needs or family visits are the reasons that they leave to the United States. 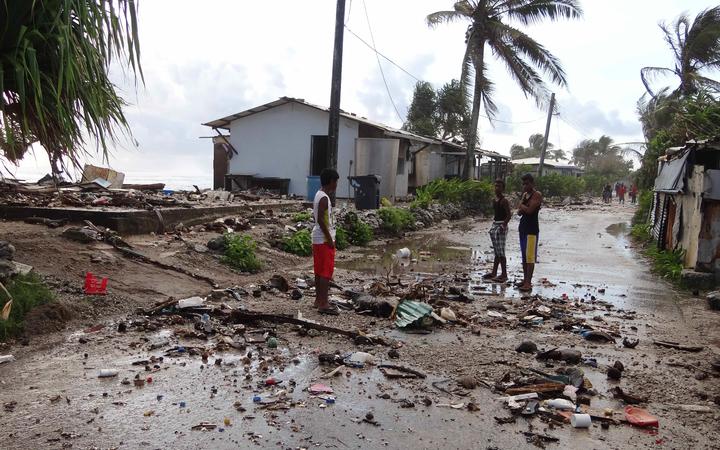 Majuro residents amid the debris from an ocean inundation in 2014 Photo: Marhall Islands Journal

The survey reports that "voluntary migration" of islanders to the United States over recent decades provides a positive example of migration in the context of climate change that could be a global model.

"While respondents expressed concern about the future impacts of climate change on the environment, livelihoods and security of their islands, these survey findings suggest that they do not at present identify these impacts as important drivers of migration," said a policy brief entitled "Marshallese perspectives on migration in the context of climate change." It was published by the International Organization for Migration (IOM) as part of a policy brief series.

In late November, a high tide energized by strong wave surges inundated many areas of Majuro, including the densely populated downtown area of Majuro, forcing over 200 people to temporarily evacuate their homes because of flooding. Inundation events are projected by climate researchers to increase in frequency as sea levels continue to rise.

The Marshall Islands and the three other all-atoll nations of Kiribati, Tuvalu and the Maldives "require immediate strategies for adaptation and solutions for land loss, beach erosion, water security, ecosystem health, and economic development issues," said the Asian Development Bank last month in a report on a strategy conference held by the four atoll nations recently.

The new migration survey report highlights different perceptions among Marshallese living in the Marshall Islands and in the US. It also says the fact that tens of thousands of Marshallese have already migrated to the US is a positive factor for greater climate-related migration.

Marshall Islands leaders, however, are fully aware of the risks. President Hilda Heine told the global climate summit in Madrid earlier this week: "The most vulnerable already face death row." If countries of the world don't take stronger action to reduce climate change, it is like "passing sentence on our future. To force our country to die," she said.

The migration survey said the findings "illustrate an existential dilemma: on the one hand, it is important to be prepared for a future in which islands may become uninhabitable, and to make sure that migration and relocation can take place in an informed, orderly manner that minimizes loss and damage. On the other hand, suggesting migration and relocation as solutions is extremely sensitive as it suggests giving up on the islands."

The survey report added: "A majority of the survey respondents think that it is too soon for this, and that there is still much uncertainty about the future impacts of climate change and the capacity to adapt locally. However, as this study also shows, there might be a middle ground."

That "middle ground" for migration has already been developed by Marshallese establishing multiple communities in the United States over the past 30 years.

A treaty known as the Compact of Free Association, approved in 1986, allows islanders visa-free access to the US in exchange for US military control of their vast western Pacific island area.

Marshall Islands voluntary migration "is already happening at a rapid pace today, and new Marshallese communities are emerging in the United States," said the survey report.

"The current migration experience that Marshallese people are gaining and the migrant networks they are building can become an important resilience asset in the future.

"Migration outcomes tend to be negative when people are forced to migrate or are displaced without enough time to adequately prepare. The Marshallese migration experience and networks can facilitate future migrations in the context of climate change that are more proactive and planned and less forced."