An 11-year-old Australian boy of Cook Island Māori descent has been left distressed after he was pointed out as "the big kid" and called to get off the field in the middle of a junior rugby tournament in Sydney earlier this month. 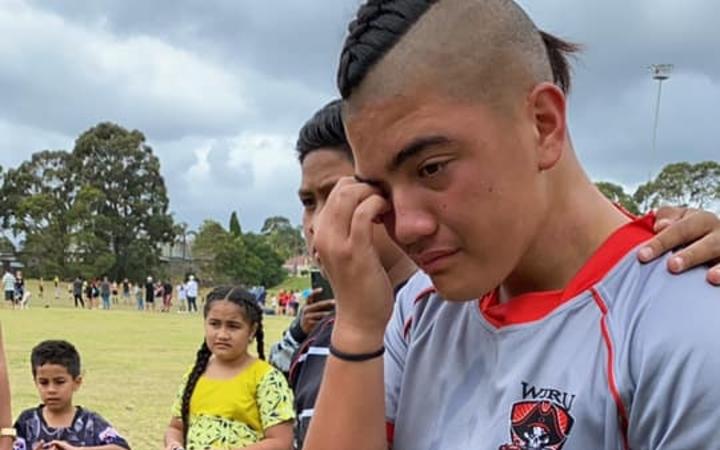 Leo after being told he's too big to play. Photo: Supplied

The event has left his mum Ayla Hinekiteao picking up the pieces and calling for better administration and communication from the Sydney Junior Rugby Union moving forward, in an attempt to avoid this from happening in the future.

After playing for three weeks in the eight-week tournament, Leonidus (Leo) Aotearoa Tuainekore Farr (Mangaian / Te Whanau-a-Apanui) was singled out in front of his team mates and over 100 spectators when officials told him he was too big to play in his age grade and needed to get off the field.

Shortly after that, he was told he could play for the remainder of the day but he would have to sit out the last three weeks of the tournament.

Despite being humiliated, Leo picked up the courage to get back on the field to enjoy the remaining games with his team mates but it was short lived and he was knocked down again when he was waved to get off the field by officials protesting that the game would not start while he was on the field.

Ayla said she was disgusted at how the situation was handled especially when dealing with children.

"Seeing my child being told he cannot play, coming off the field bawling his eyes out. How they just approached the whole situation...I think it's pretty poor on their side," she said.

"There could've been other ways and methods that they could've gotten through to let us know that 'okay, look we have a dispensation, he can not play,' and just gone about it that way instead of approaching us on game day. He's there thinking that he's playing. Then he's been stopped - the game's been stopped because he's on the field."

Prior to the eight-week competition, Leo was assessed to play in the under 11 and under 12 grades for his school after a complaint was made by a parent. He was cleared and deemed under his age, height, and weight and no dispensation was required.

But after the school holidays, Ayla insisted that Leo undergo another assessment to prevent any sideline issues heading into the Public School Sporting Association (PSSA) Carnival. Recommendations were made that he play in the under 12-13 age grades but because he was already playing an age grade up at school there was no requirement to be assessed. The dispensation however was sent to Sydney Junior Rugby Union (SJRU) for their records. 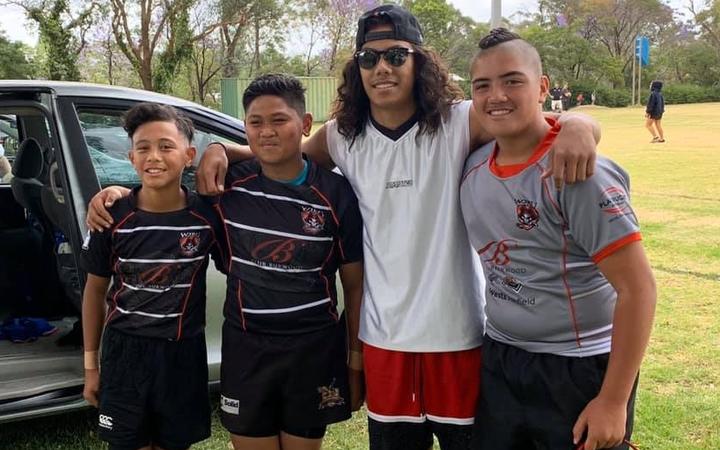 She said she was approached in week two asking for the dispensation which had already been sent to SJRU. She sent another copy that same day and nothing came of it until Leo was singled out three weeks later on the field before kick-off.

"To be told that you can't play in your own age group because you're pretty much too big is disgusting," she said.

"What about those who are wanting to go and play with their mates and that want to play in their own age group. I think that needs to be brought to light within the clubs and within rugby itself...I really hope it doesn't happen to any other kid out there because it is traumatising," she said.

"I think the humiliation part of it on Sunday has really gotten to him and it's just something that I don't really know how to deal with at the moment. It's a hard thing to have to deal with, with your child." 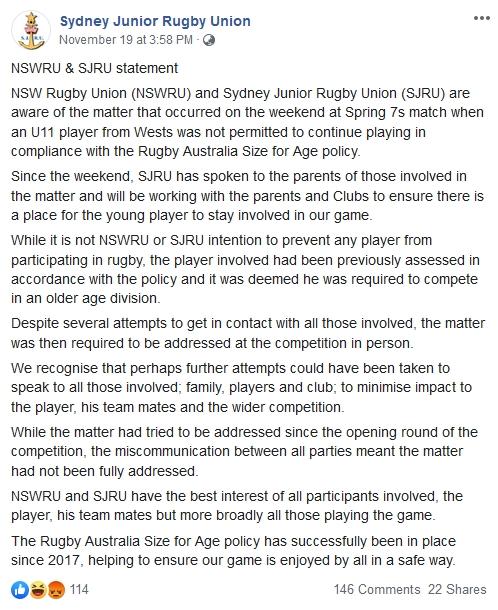 After a video of Leo getting sent off the field was posted to Facebook, he and his family have been inundated with support from around the world, but all she asks for is an apology and an explanation from NSWRU.

"There was no apology," she said. "He's [SJRU Chair Anthony Hunt] just gone and said 'okay, let's talk about the media side of things. I've seen your post. Are you willing to take it down and we can sort this matter out'."

"But then also asked me, 'if you're willing to put the post down, and maybe put up something like 'I'm in the middle of dealing with this issue with SJRU and we're going to come to some resolution.' As soon as he said that to me, I thought 'well, hang on a moment, do you really care about Leo's welfare here'."

"He did say he could come down and apologise personally to Leo and his team, but I don't think that's good enough. It wasn't him...It was other people that approached us.

"SJRU said they had made some attempts to call our rugby club but I just think that's a lot of BS," she said.

In a statement made by NSW Rugby Union (NSWRU) and Sydney Junior Rugby Union (SJRU) posted to the SJRU Facebook page, they said they were aware of the matter and would be working with the parents and clubs to ensure there was a place for Leo to stay involved in the game.

"While it is not NSWRU or SJRU intention to prevent any player from participating in rugby, the player involved had been previously assessed in accordance with the policy and it was deemed he was required to compete in an older age division," it read.

"Despite several attempts to get in contact with all those involved, the matter was then required to be addressed at the competition in person.

"We recognise that perhaps further attempts could have been taken to speak to all those involved; family, players and club; to minimise impact to the player, his team mates and the wider competition.

"The Rugby Australia Size for Age policy has successfully been in place since 2017, helping to ensure our game is enjoyed by all in a safe way."

Since then, Leo has continued to support his team from the competition sidelines but it was too soon to discuss the idea of playing rugby in the future.