The Marshall Islands extended its declaration of a national health emergency for another month Friday as dengue fever cases continue to mount. 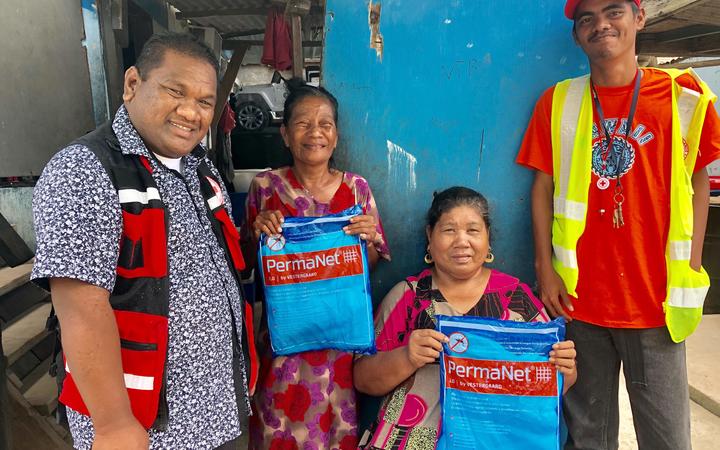 Red Cross volunteers have been active in distributing mosquito nets to residents in Ebeye (pictured) and Majuro as the dengue outbreak has continued for three months. Photo: Roger Muller

While cases of dengue fever on Ebeye Island have dropped to a daily trickle, Majuro continues to see high numbers, according to the latest report from the Ministry of Health and Human Services.

President Hilda Heine signed the second one-month extension of the declaration of health emergency, which will see it extend to early November.

Ebeye is where the dengue outbreak started, with the first case reported in late May.

The numbers took off in late July, and at peak in early August, Ebeye hospital was seeing 10-to-15 people per day with confirmed and suspected dengue fever.

Since September 15, there have been several days with no reported cases and the most has been three on one day, with most days the past two weeks showing one or two.

As of Friday, the ministry reported 661 confirmed and suspected cases of dengue in Majuro and Ebeye, the two urban centers.

A ban on passenger travel to the outer islands remains in effect. The halt to travel has so far prevented spread of the illness to remote islands that have little capacity to manage serious health problems. The ban has also disrupted tourism and commercial activities since the ban went into effect in mid-August.

Majuro's first case was seen August 15 and the numbers took off in early September. The second week of September saw nearly 20 suspected and confirmed cases of dengue in one day, the highest one-day total during the current outbreak.

But high numbers continue, with the ministry reporting 24 new dengue cases in Majuro from Wednesday through Friday this week. Ebeye reported three cases during the same three-day period.

Through October 4, Majuro had 399 cases and Ebeye 262. There are still no reports of dengue from outer islands.